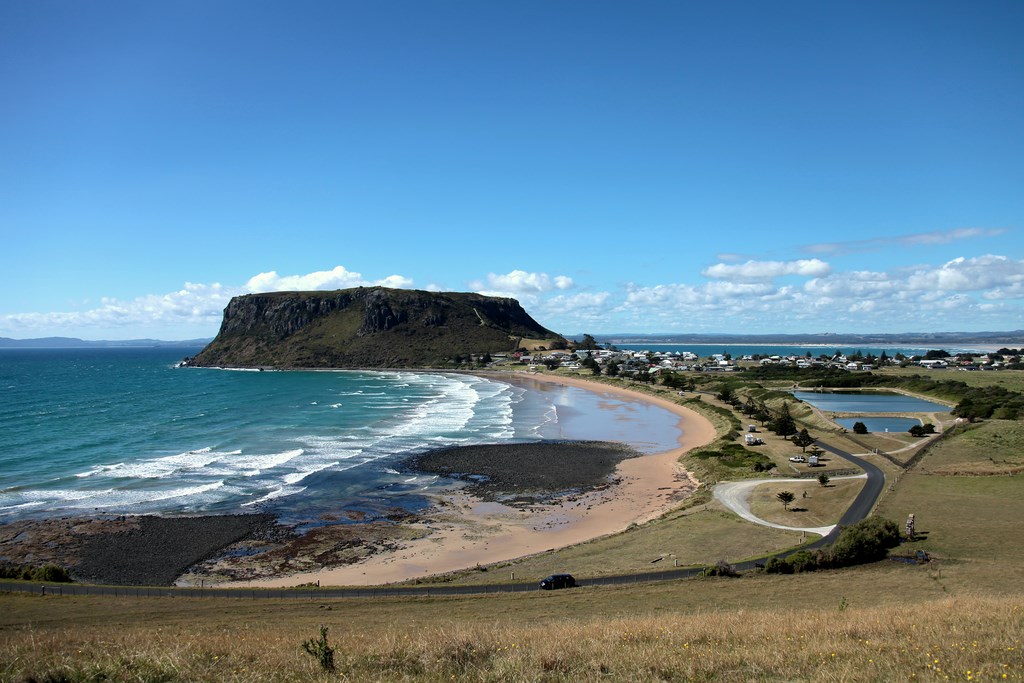 Picture of the town of Stanley took from the Highfield Historic Site. Canon 5D Mark II - F/4.5 - Speed : 1/1600s - ISO 100 - Lens Canon L IS USM 28-300 mm - Focal : 28 mm.
Stanley is a town on the north-west coast of Tasmania, Australia. Travelling west, Stanley is the second-last major township on the north-west coast of Tasmania, Smithton being the larger township in the Circular Head municipality. According to the 2016 census, Stanley had a population of 543.
Today Stanley is a tourist destination and the main fishing port on the north-west coast of Tasmania.The most distinctive landmark in Stanley is The Nut, an old volcanic plug discovered by the explorers Bass and Flinders in 1798, who named it Circular Head. It has steep sides and rises to 143 metres with a flat top. It is possible to walk to the top of The Nut via a steep track or via a chairlift. Tourists regularly travel to Highfield (a farming region on the north west of the township) to view the picturesque northern beaches with The Nut in the background. The port on the southern side of The Nut is also a regularly used fishing spot.

History
In 1825 the Van Diemen's Land Company was granted land in north-western Van Diemen's Land, including the Stanley area. Employees of the company from England settled in the area in October 1826.

It was named after Lord Stanley, the British Secretary of State for War and the Colonies in the 1830s and 1840s, who later had three terms of office as British Prime Minister.

A port opened in 1827 and the first school opened in 1841. The Post Office opened on 1 July 1845; it was known as Circular Head until 1882. In 1880 the first coach service between Stanley and Burnie was established.

In 1936 a submarine telephone cable from Apollo Bay to Stanley provided the first telephone to Tasmania from the mainland.