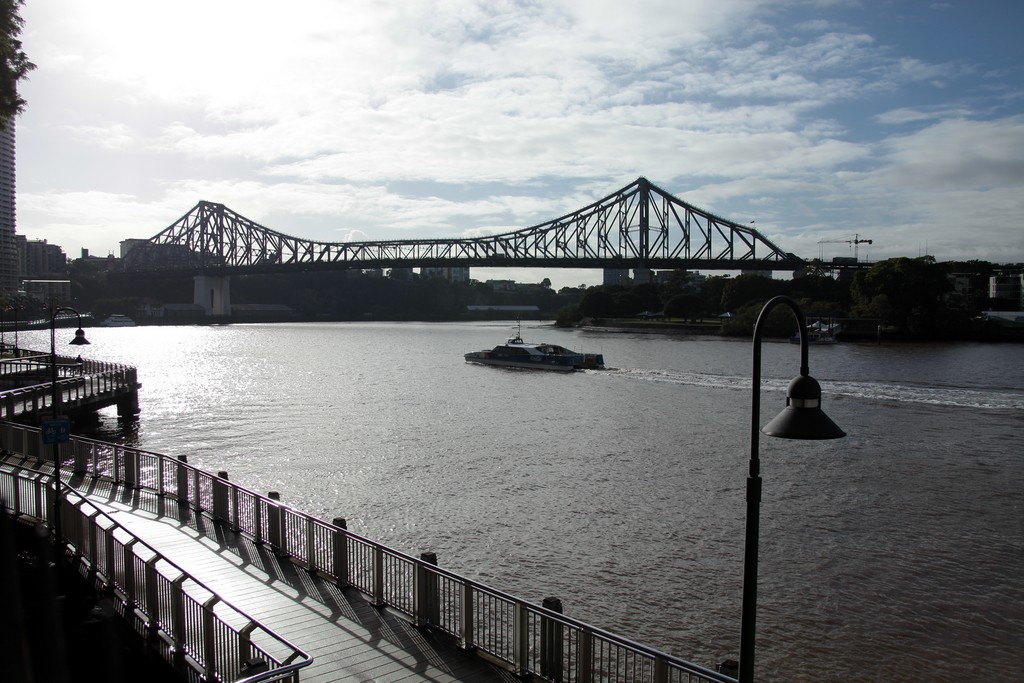 The Story Bridge is a steel cantilever bridge spanning the Brisbane River that carries vehicular, bicycle and pedestrian traffic between the northern and the southern suburbs of Brisbane, Queensland, Australia. It is the longest cantilever bridge in Australia.

The bridge is part of Bradfield Highway (15) and connects Fortitude Valley to Kangaroo Point. It is named for John Douglas Story.

History
Planning
A bridge downstream of the Victoria Bridge was part of a larger plan, devised by Professor Roger Hawken of the University of Queensland in the 1920s, for a series of bridges over the Brisbane River to alleviate congestion on Victoria Bridge and to divert traffic away from the Brisbane central business district. The William Jolly Bridge was the first of the Hawken Plan bridges to be constructed. Lack of funds precluded the construction of the downstream bridge at that time. Initially plans called for a transporter bridge further downstream near New Farm.

In 1926 Kangaroo Point was recommended by the Brisbane City Council's Cross River Commission. Subsequently the bridge was constructed as a public works program during the Great Depression. The cost was to be no more than pounds 1.6 million.

Construction
Before the opening of the Sydney Harbour Bridge in 1932 the Government of Queensland asked John Bradfield to design a new bridge in Brisbane.

The Queensland Government appointed John Bradfield on 15 December 1933 as consulting engineer to the Bureau of Industry who were in charge of the construction of the bridge. In June 1934 Bradfield's recommendation of a steel cantilever bridge was approved. The design for the bridge was based heavily on that of the Jacques Cartier Bridge in Montreal, completed in 1930. On 30 April 1935 a consortium of two Queensland companies, Evans Deakin and Hornibrook Constructions, won the tender with a bid of pounds 1,150,000.

Construction on the bridge began on 24 May 1935, with the first sod being turned by the then Premier of Queensland, William Forgan Smith. Components for the bridge were fabricated in a purpose-built factory at Rocklea. Work sometimes continued 24 hours per day. The bridge has only one pier on the northern bank but two piers on the lower southern bank, one to bear the weight (the main pier) and, further to the south, one to prevent the bridge from twisting (the anchor pier). There was no need for an anchor pier on the northern bank as the bridge was anchored into schist cliff face. The major challenge in constructing the bridge was the southern foundations that went 40 metres below ground level. It was not possible to excavate to that level as water from the level would rapidly seep in. So a pneumatic caisson technique had to be used. As men were working under pressures of up to 4 times normal air pressure, a decompression period of almost 2 hours was needed at the end of each shift to avoid the bends. An on-site air lock hospital successfully treated the 65 cases of the bends that occurred. On 28 October 1939 the gap between the two sides was closed. A concrete decking was then laid, covered by a Trinidad pitch topping. The bridge was painted and sodium lighting was installed. The bridge approaches were also prepared.

Naming
Until it was completed the bridge was known as the Jubilee Bridge in honour of King George V. It was opened on 6 July 1940 by Sir Leslie Orme Wilson, Governor of Queensland and named for John Douglas Story, a senior and influential public servant who had advocated strongly for the bridge's construction.