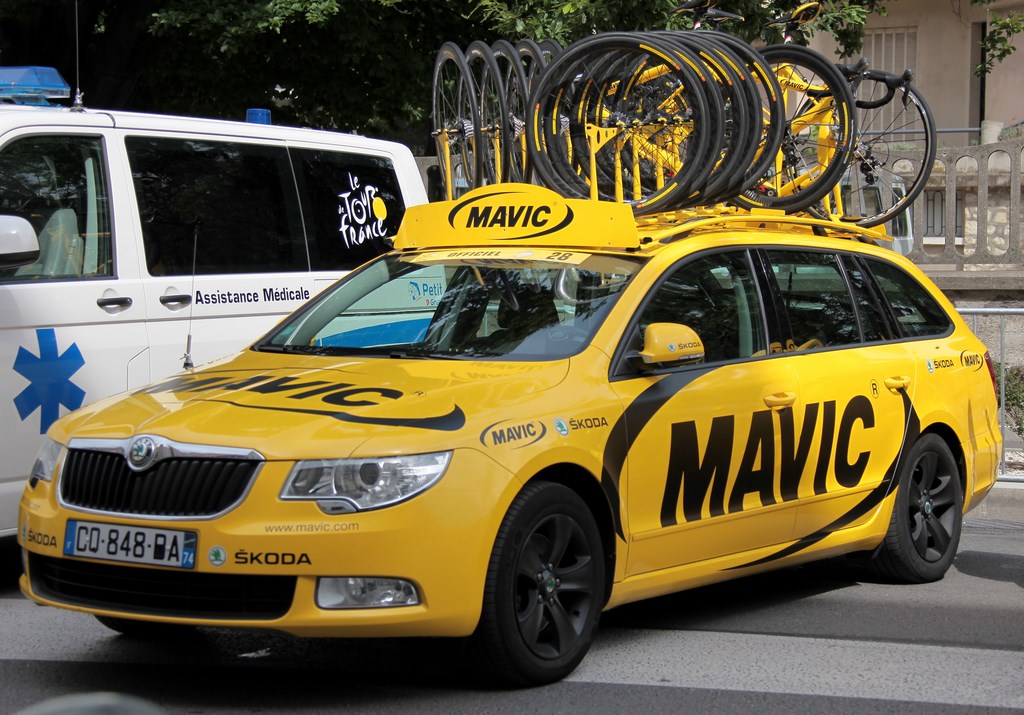 Mavic is a French bicycle parts manufacturer, (its name an acronym for Manufacture d'Articles Vélocipédiques Idoux et Chanel), founded by Charles Idoux and Lucien Chanel. The company is noted as a manufacturer of bicycle wheels. Mavic is based in Annecy, France. Since the 1970s, the company has been an official partner and sponsor of the Tour de France.
It is owned by Finnish conglomerate, Amer Sports, that also owns Salomon, the Austrian ski manufacturer Atomic and the tennis racquet maker Wilson. Salomon acquired Mavic in the 1990s, and was in the late 90s taken over by Adidas. In 2005, Salomon and Mavic were sold to Amer.
Mavic has used a variety of trademarks during its history, often based on the versions of the company name. In 2008 it introduced a stylised letter "M" for use on its products.

The company has employed innovative production with metals and especially alloys. Salomon had Mavic produce the edges for its skis and snowboards.

Mavic designed a spoke nipple mounted on the inside of the rim rather than from the tire side. This allows a rim to remain unpierced on the tire side with the exception of the valve hole. Less material is used in the rim. The Ksyrium wheelset was the first road to utilise this "fore" feature.

Mavic developed electronic gear-shifting system in the 1990s, first called Zap, then later re-engineered as Mektronic. The Mektronic was used by riders including Chris Boardman. However, it suffered engineering problems, notably that Boardman's bike shifted gear unpredictably, and was discontinued.

Road racing
Since 1973 the company has provided technical service to races. Yellow cars and motorcycles follow the race with wheels and bicycles. Mechanics change wheels or bicycles for any rider. Mavic has never made complete bikes so the service frames are provided by an outside manufacturer. Cannondale and Litespeed have been used.

The top road wheels for many years were Ksyrium and Cosmic series. The Ksyrium has given way to the R-Sys. The R-Sys has tubular carbon fiber spokes that work in tension (like a traditional bicycle wheel) and compression (like a wagon wheel with wooden spokes). The spokes are held via "fore" technology at the rim and the TraComp ring at the hub. This allows lower spoke tension, which makes lighter wheels. The semi-aero Cosmic wheel is all carbon except for the rear hub. In 2009 Mavic released a recall on their R-Sys wheel. Having reports from customers on catastrophic failure during rides.

Track
Mavic makes some of the most popular and successful carbon disc wheels, which have been used to win many races. Mavic has made a carbon fibre deep section front wheel with five wide carbon spokes, the iO, which has been very successful. Some racers use it for road time trials, but this is not approved by Mavic as the rims are not designed for braking.