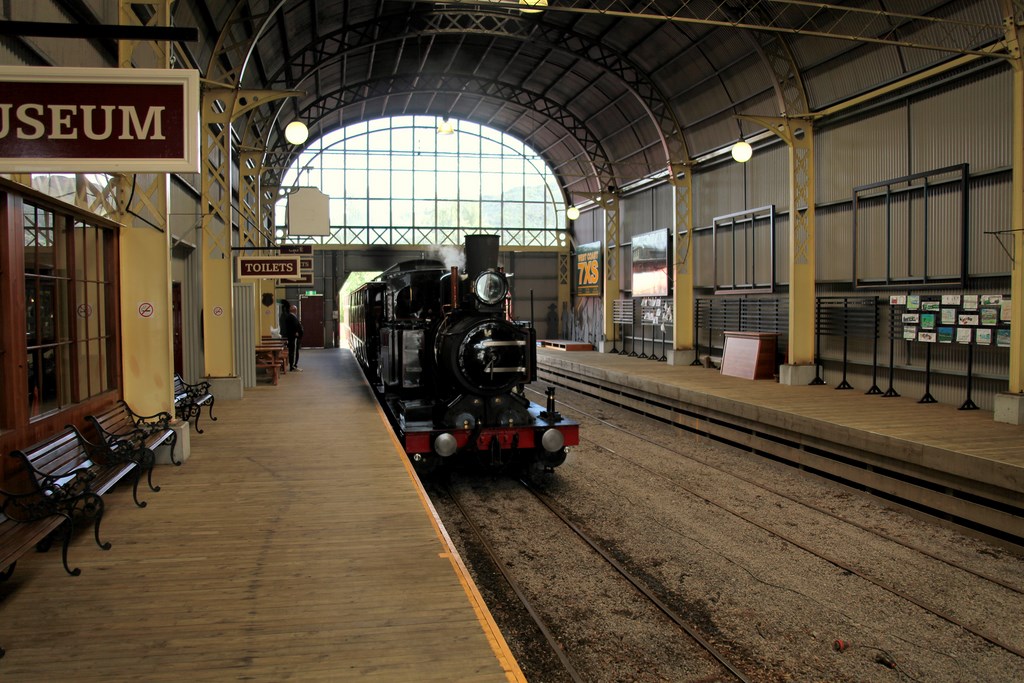 The West Coast Wilderness Railway, Tasmania is a reconstruction of the Mount Lyell Mining and Railway Company railway between Queenstown and Regatta Point, Strahan.
The railway is significant because of its Abt system to conquer the mountainous terrain through rainforest, with original locomotives still operating on the railway today. Now operating as a tourist experience with a focus on sharing the history of the Tasmania's West Coast, the original railway began operations in 1897 as the only link between Queenstown and the port of Strahan.

The railway was the only way to get the copper from the mine at Queenstown, Tasmania to markets. Until 1932, when a Hobart road link was completed, it was the only access through to Queenstown. The motto of Kelly and Orr was Labor Omnia Vincit, which shows the achievement of this railway because it ran, even though multiple surveyors said it was not possible, the weather was extreme, the trains had to climb 1m in 16m (6.25%), and the train had to carry many tonnes of copper and the rail line had to survive natural disasters (including floods in 1906).
The railway utilised the Abt rack and pinion system for steep sections. Because of the gradients, tonnages were always limited on the railway. The gauge is 3 ft 6 in (1,067 mm).

The original line continued into the Mount Lyell mining operations area in Queenstown, and at Regatta Point the line linked around the foreshore of Strahan to link with the Government Line to Zeehan.

The railway ceased operation on 10 August 1963 due to increasing maintenance costs and the improvement of road access to the West Coast from the North with the opening of the Murchison Highway. The last train run was performed by the same engine that ran the first run (ABT 1 in 1896 was the first engine to steam into Queenstown). The rail and other movable items were lifted taken off-site, leaving most of the bridges intact.

Following the closure of the railway, the rolling stock was dispersed; carriages went to the Puffing Billy Railway in Victoria and the Abt locomotives were put on static display or in museums. With the removal of the railtrack the formation from Regatta Point came to be used by road vehicles for access to Lette's Bay and Lowana to the East.

Most bridges remained intact but fell into disrepair, and the route was unsuitable for vehicle access beyond the Iron Bridge that crosses the King River at the location of the early port of Teepookana

Steepest Gradient
The steepest gradient on the rack section was 1 in 15 (6.67%),

Reconstruction
Despite various proposals post 1963, it was not until the 1990s after the demise of the main Mount Lyell Company mining operations, and the downgrading of Hydro Tasmania's activities of dam building on the West Coast, that some very committed local West Coast people campaigned for the restoration of the Abt Railway as an iconic heritage tourist attraction featuring the unique rail system and the community's mining history.The restoration of the Abt Railway was made possible through the allocation of $20.45M from the Australian Government Prime Minister's Federal Fund, with further funding from the State Government and some private investment.

New railway
The restored railway commenced operations on 27 December 2002 as the Abt Wilderness Railway, and was officially re-opened by the Prime Minister of Australia John Howard and the Premier of Tasmania Jim Bacon in 2003.

The new terminus in Queenstown is on the site of the original station yard. The station at Regatta Point terminus has been renovated.

The railway follows its original alignment except for the "Quarter Mile Bridge" near Teepookana. The old bridge was washed away in the floods of 1974, and the new bridge is just south of the original.

Of the five original steam locomotives, ABT 1 and ABT 3 were restored in 2001 and ABT 5 in 2005; ABT 2 is on display at the Tasmanian Transport Museum, Glenorchy, Hobart; and ABT 4 was scrapped to provide parts for the other locomotives. The passenger carriages are new, providing passenger comfort for year-round operation.

Change in operations
On 4 February 2013 the Federal Group announced that it would be terminating its lease of the railway in April 2013. The company said that a downturn in business and a need for investment in infrastructure had caused the railway to no longer be viable. The Tasmanian government responded by estimating that maintaining the railway would cost $15 to $20 million, and that the government alone could not fund it.
Following track rehabilitation work, the railway re-opened between Queenstown and Dubbil Barril on 6 January 2014, while rehabilitation of the section through to Strahan continues.