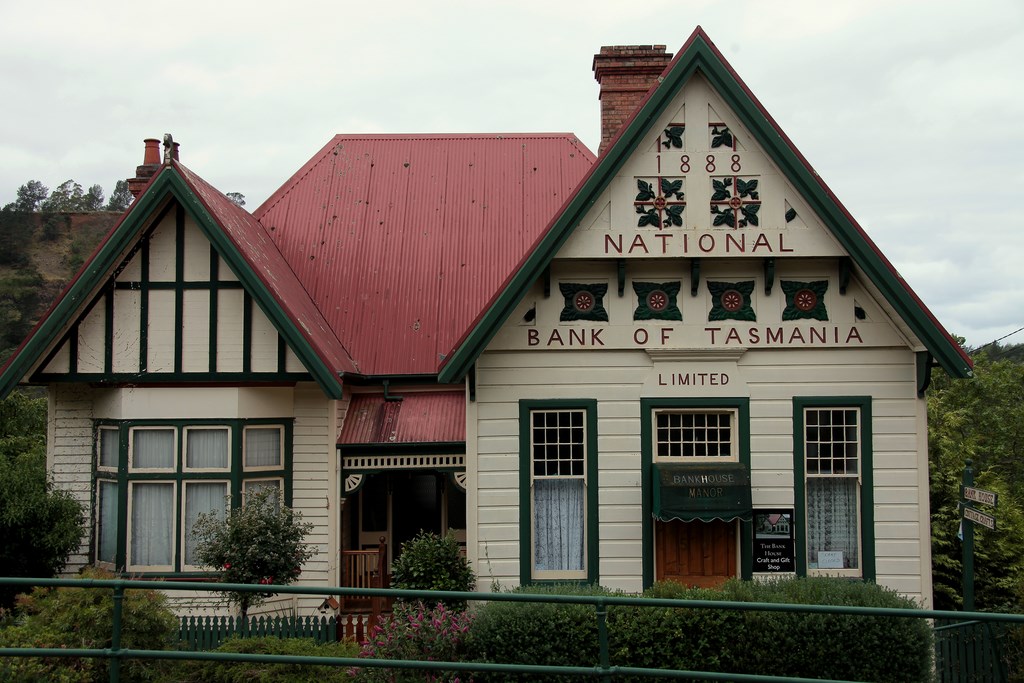 The National Bank of Tasmania Limited was established in Launceston in 1885 as a reconstruction of the financially ailing Bank of Tasmania.
Banknotes were issued at branches in Hobart, Launceston and Zeehan with operations confined primarily to the northern areas of Tasmania. Early note issues were made using altered Bank of Tasmania stocks. The bank was absorbed by the Commercial Bank of Australia Limited in 1918, now part of the Westpac Banking Group Limited.

Derby is a small Australian town located in the northeast of Tasmania.
The area had been surveyed in 1855, but was not settled until 1874, when George Renison Bell discovered tin in the area. The Krushka brothers discovered a large lode of tin, and set up a mine (named The Brothers Mine) in the area, assuring the town's economic future. The town was originally known as Brother's Home until renamed Derby (believed to be after Edward Smith-Stanley, 14th Earl of Derby the Prime Minister of the United Kingdom).
Brother's Home Post Office opened on 1 August 1882 and was renamed Derby in 1885.
Derby reached its peak in the late 19th century, when its population reached over 3,000, and the Brothers Mine (renamed the Briseis Mine after the winner of the 1876 Melbourne Cup) was producing upwards of 120 tonnes of tin per month.
On 4 April 1929, the dam used by the mine burst after heavy rains and flooded the town, killing 14 people. The mine was closed, but re-opened five years later although it never reached the same level of output as it had in the last century and closed in 1948.
Derby was served by a branch railway line which extended from Launceston to Herrick, 4 kilometres (2.4 mi) short of Moorina. The line through Derby station opened on 15 March 1919 and ran through the hills 2 km (1.2 mi) from the town. The railway closed in April 1992.