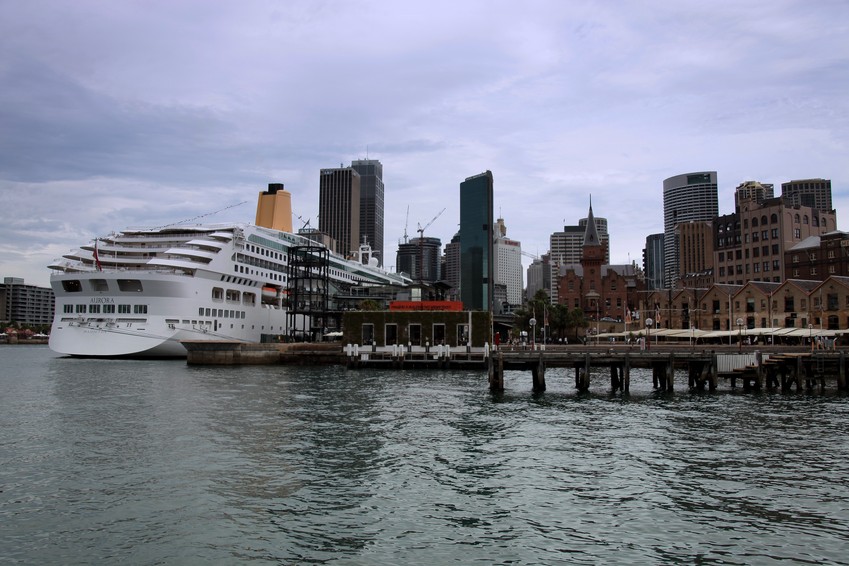 Circular Quay is a harbour in Sydney, New South Wales, Australia on the northern edge of the Sydney central business district on Sydney Cove, between Bennelong Point and The Rocks. It is part of the local government area of the City of Sydney. The Circular Quay area is a popular neighbourhood for tourism and consists of walkways, pedestrian malls, parks and restaurants. It hosts a number of ferry quays, bus stops, and a train station. Despite its name, the waterfront at the quay is roughly square in shape.

Transport
Circular Quay is a major Sydney transport hub, with a large ferry, rail and bus interchange. The Cahill Expressway is a prominent feature of the quay, running from the east, over the elevated railway station to join the Sydney Harbour Bridge in the west. International ships have docked and moored at Circular Quay since the earliest years of the colony. The Overseas Passenger Terminal, situated on the Quay, is a major piece of Sydney transport infrastructure serving cruise ships and ocean liners and their passengers. The railway station is the only station on the City Circle that is above ground. The platform looks out over the ferry terminus, providing views of Sydney Harbour, including the bridge and Opera House. The wharf complex hosts five commuter ferry wharves and is the terminus for all public ferry routes in Sydney Harbour and the Parramatta River other than the Mortlake Ferry between Mortlake and Putney. Circular Quay was formerly a large tram terminus and interchange. As many Sydney bus routes follow the previous tram lines, the tram terminus in Alfred Street became a major bus terminus for many bus routes. A redesign of CBD bus services in October 2015 reduced the number of bus routes serving the Quay. In response to increasing bus congestion in the CBD, on 13 December 2012 the NSW Government announced a commitment to build a $1.6 billion light rail from Circular Quay down George Street to Central Station, then across to Moore Park and down Anzac Parade. South of Moore Park the line will spit into two branches - one continuing down Anzac Parade to The Nine Ways at Kingsford, and the second heading to Randwick via Alison Road. Construction commenced in October 2015.

Culture
Circular Quay is a focal point for community celebrations, due to its central Sydney location between the Sydney Opera House and the Sydney Harbour Bridge. It is one of the main congregation points for Sydney New Year's Eve. Circular Quay is also the home of Sydney's Museum of Contemporary Art and the City of Sydney Library in the heritage-listed Customs House. In autumn 2006, the largest open-air art exhibition ever in Australia took place on Circular Quay: Over 7 weeks the Berlin Buddy Bears visited Sydney. Each bear represents a member-country of the United Nations, symbolizing the universal principles of peace, freedom and friendship. The quay is mentioned in the song "And the Band Played Waltzing Matilda" (1971) by Eric Bogle. Water Polo by the Sea is held there every year by Australian Water Polo with the Australia men's national water polo team take on the International All Stars.