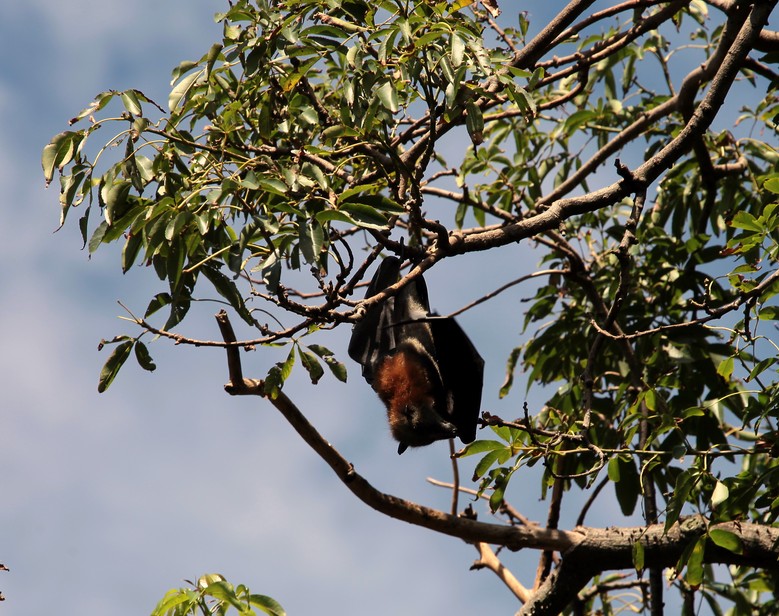 The Grey-headed Flying-Fox (Pteropus poliocephalus) is a megabat native to Australia. The genus Pteropus currently has over 60 recognised species, which include the largest bats in the world. Pteropus is primarily an island taxon, with 55 species having some or all of their distribution on islands. Only nine species are found in continental areas (five in Asia and four in Australia), and three (Lyle's flying-fox Pteropus lylei, little red flying-fox Pteropus scapulatus and the grey-headed flying-fox) are restricted to continents. The grey-headed flying-fox is very long-lived for a mammal of its size. There are reports of individuals surviving in captivity for up to 22 years, and a maximum age of up to 15 years seems possible in the wild.

Physical characteristics
The Grey-Headed Flying-Fox is the largest bat in Australia. It is tailless with claws on its first and second digits. Since it does not echolocate, it lacks tragus or leaf-ornamentation found in most species of Microchiroptera. It relies on sight to locate its food (nectar, pollen and native fruits) and thus has large eyes. The flying-fox has a dark grey body with a light grey head and a reddish-brown neck collar of fur. It is unique among bats of the genus Pteropus in that fur on the legs extends all the way to the ankle. Adult grey-headed flying-foxes have an average wingspan of up to 1m and can weigh up to 1 kg. The head and body length is between 230 and 289 mm, with an average of 253 mm. The forearm length is between 138 and 180 mm, with an average of 161 mm. Weight generally varies between 600 and 1000 g, with an average of 677 g.

Habitat and movements
Grey-headed flying-foxes live a variety of habitats including rainforests, woodlands and swamps. During the day individuals reside in large roosts (colonies or 'camps') consisting of hundreds to tens of thousands of individuals. Colonies are formed in seemingly arbitrary locations. Roost vegetation includes rainforest patches, stands of Melaleuca, mangroves and riparian vegetation, but roosts also occupy highly modified vegetation in urban areas. A prominent example is the Royal Botanic Gardens in Sydney, home to a colony that at its summer peak contains over 22,000 flying-foxes. Movements of the Grey Headed Flying-Fox are influenced by the availability of food. Their population is very fluid as they move in response to the irregular blossoming of certain plant species. The Grey-headed flying-fox is a partial migrant that uses winds to facilitate long-distance movement. It does not migrate in a specific direction, but rather in the direction that will be the most beneficial at the time.

Diet and foraging
Around dusk, grey-headed flying-foxes leave the roost and travel up to 50 km a night to feed on pollen, nectar and fruit. The food sources utilised by the species are fruit flowers and pollens from up to 187 plant species. Theses include Eucalyptus, particularly Eucalyptus gummifera, Eucalyptus muellerana, Eucalyptus globoidea and Eucalyptus botryoides, and fruits from a wide range of rainforest trees, including members of the Ficus genus. These bats are considered sequential specialists since on a variety of foods. Grey-headed flying-foxes, along with the three other Australian flying-fox species, fulfil a very important ecological role by dispersing the pollen and seeds of a wide range of native Australian plants. The grey-headed flying-fox is the only mammalian nectarivore and frugivore to occupy substantial areas of subtropical rainforests and so is of key importance to those forests. Most vegetation communities used by the grey-headed flying-fox produce foraging resources in seasonal but annually irregular superabundant pulses, and the grey-headed flying-fox has adopted complex migration traits in response to such ephemeral and patchy food resources. However, there are some temporally and spatially reliable resources restricted to a small number of coastal vegetation communities in northern New South Wales and Queensland that may support smaller resident populations. The time when flying-foxes leave their roosts to feed de pends on foraging light and predation risk. Flying-foxes have more time and light when foraging if they leave their roosts early in the day. The onset of a colony-wide emergence was gets delayed when a diurnal avian predator is present, whereas the onset is advanced for females during lactation when presumably energetic demands are higher. The emergence time of adult males depended on their social status: smaller bachelor males emerged from the colony earlier than larger harem-holding males who guard their harems until the last female had left. The flying-foxes that leave the roost earlier are more vulnerable to predation and some other flying-foxes will wait for others to leave, a phenomenon labelled the "after you" effect.

Social behavior
Groupings and territories
Grey-headed flying-foxes form two different roosting camps, summer camps and winter camps. Summer camps are used from September to April or June. It is in these camps that the flying-foxes establish territories, mate and reproduce. Winter camps are used from April to September. Winter camps tend to be segregated between sexes with little agnostic behaviour and more mutual grooming Summer camps are considered "main camps" while winter camps are referred to as "transit camps" In their summer camps, starting in January, male grey-headed flying-foxes sent up mating territories which contain harems of up to five females. Mating territories are generally 3.5 body lengths along branches. The flying-foxes have neck glands which enlarge in males in the mating season and are used to mark the territories, usually entire branches. Males also maintain territories though aggressive behaviour. The territorial system has been described as similar to a lek system. The males fight to maintain costly territories with the most dominant males occupying the centre of the roosting site. The females move from the periphery into the central territories and form into harems. However, the territories may have values other than the males themselves as they do provide a place for females to roost. Centrally located males are polygamous while males on the periphery seem to be more monogamous as they form mixed-sex groups with females that were still nursing their young from the previous year.

Mating
Matings are generally observed between March and May but the most likely time of conception is April. Most mating takes place in the territories and during the day. Females have power in initiation and termination of copulations and thus a male will mate several times with the same female for up to an hour and multiple mating sessions with the same female over the course of several days. The majority of females reproduce once a year and give birth to a single young. Gestation is about 27 weeks and pregnant females give birth between late September and November. Late births into January are sometimes observed. The young are born altricial and are dependent on their mothers for regulation of temperature. Females carry their young for the first three weeks during their nightly foraging trips and after this time young are left in the roost at night. Young are capable of independent flight when they are approximately 4 months old at which time they commence foraging outside the colony. Young are weaned when they are approximately 6 months old.

Conservation
The grey-headed flying-fox is now a prominent federal conservation problem in Australia. Early last century the species was considered abundant with numbers estimated in the many millions. However, in recent years, direct evidence has been accumulating that the species is in serious decline. Current estimates for the species are about 300,000 and it has been suggested that the national population may have declined by over 30% between 1989 and 1999 alone. Grey-headed flying-foxes are exposed to several threatening processes, including loss of foraging and roosting habitat, competition with the black flying-fox, and mass die-offs caused by extreme temperature events. When present in urban environments grey-headed flying-foxes are sometimes perceived as a nuisance. Cultivated orchard fruits are also taken but apparently only at times when other food items are scarce. Because the roosting and foraging habits of the grey-headed flying-fox bring the species into conflict with humans, the species suffers from direct killing of animals in orchards and harassment and destruction of roosts. Negative public perception of the species has intensified with the discovery of three recently emerged zoonotic viruses that are potentially fatal to humans: Hendra virus, Australian bat lyssavirus and Menangle virus. However, only Australian bat lyssavirus is known from two isolated cases to be directly transmissible from bats to humans. Recent research has shown that since 1994, more than 24,500 grey-headed flying-foxes have died from extreme heat events alone. This is of increasing concern for the survival of this species now that climate models predict significant increases in the intensity, duration and frequency of such temperature extremes. To answer some of the growing threats, roost sites have been legally protected since 1986 in New South Wales and since 1994 in Queensland. In 1999 the species was classified as ‘Vulnerable to extinction' in The Action Plan for Australian Bats, and has since been protected across its range under Australian federal law. As of 2008 the species is listed as 'Vulnerable on the IUCN Red List of Threatened Species.

Wildlife rescue
Bat carers are not only specially trained in techniques to rescue and rehabilitate bats, they are also vaccinated against rabies. Although the chance of contracting the rabies-like Australian bat lyssavirus is extremely small, bat carers are inoculated for their own protection. Flying-foxes often come to the attention of Australian wildlife care and rescue organisations such as Wildcare Australia, ONARR, Wildlife Carers Darling Downs, Bat Care, Bat Rescue, Tweed Valley Wildlife Carers, WIRES and Wildlife Victoria when reported as injured, sick, orphaned or abandoned. A very high proportion of adult flying-fox injuries are caused by entanglement in barbed wire fences or loose, improperly erected fruit tree netting, both of which can result in very serious injuries and a slow, agonising death for the animal if not rescued quickly. Baby flying-foxes usually come into care after having been separated from the mother. Babies are often orphaned during 4 to 6 weeks of age when they inadvertently fall off the mother during flight. When they are older, orphans usually come into care because of maternal death from power line electrocution or barbed wire entanglement. A rare, but apparent natural, occurrence of mass abandonment can lead to the rescue of hundreds of babies at one time. The latter most recently occurred in November 2008 at the Canungra bat camp in South East Queensland when Wildcare Australia, working closely with the EPA and regional bat care groups, rescued and rehabilitated over 300 baby Grey-headed Flying-foxes. Most babies are in a dehydrated and distressed state by the time they are rescued, and some are infested with maggots if found sick or injured. A young flying-fox must be fed every 4 hours up to 6 times a day, and then as it develops it is introduced to blossoms and fruit. When the young flying-fox is fully weaned around 10 to 12 weeks of age, it goes into a crèche for rehabilitation and eventual release.