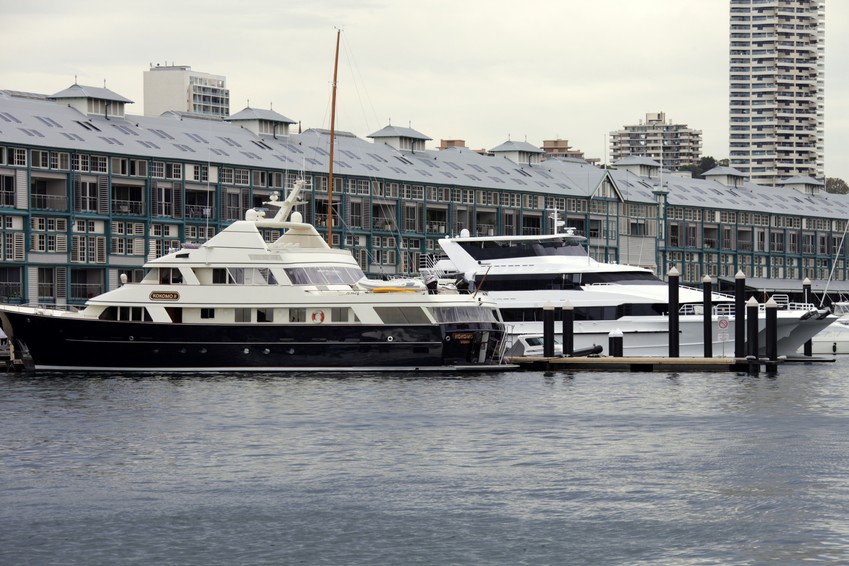 Woolloomooloo is a harbourside, inner-city eastern suburb of Sydney, in the state of New South Wales, Australia. Woolloomooloo is located 1.5 kilometres east of the Sydney central business district, in the local government area of the City of Sydney. The suburb is located in a low-lying, former docklands area at the head of Woolloomooloo Bay, on Sydney Harbour. The Domain sits to the west, the locality of East Sydney is near the south-west corner of the suburb and the locality of Kings Cross is near the south-east corner. Potts Point sits immediately to the East. The suburb has historically been a poorer working class district of Sydney. This has changed only recently with recent gentrification of the inner city areas of Sydney. The redevelopment of the waterfront, particularly the construction of the housing development on the Finger Wharf, has caused major change. Areas of public housing (housing commission) still exist in the suburb.

History
The current spelling of Woolloomooloo is derived from the name of the first homestead in area, Wolloomooloo House, built by the first landowner John Palmer. There is debate as to how Palmer came up with the name with different Aboriginal words being suggested. Anthropologist J.D. McCarthy wrote in 'NSW Aboriginal Places Names', in 1946, that Woolloomooloo could be derived from either Wallamullah, meaning place of plenty or Wallabahmullah, meaning a young black kangaroo. In 1852, the traveller Col. G.C. Mundy wrote that the name came from Wala-mala, meaning an Aboriginal burial ground. It has also been suggested that the name means field of blood, due to the alleged Aboriginal tribal fights that took place in the area, or that it is from the pronunciation by Aborigines of windmill, from the one that existed on Darlinghurst ridge until the 1850s. There is also an unserious supposition and somewhat of a legend spread among locals that the name was coined when one of Palmer's sheep entered his house (more specifically, his bathroom), and he exclaimed "There's wool on my loo!", which would later mutate into Woollomooloo.

European settlement
After the First Fleet's arrival in Sydney, the area was initially called Garden Cove or Garden Island Cove after the nearby small wooded Garden Island, off the shore. The first land grant was given to John Palmer in 1793 to allow him to run cattle for the fledgling colony. In the 1840s the farm land was subdivided into what is now Woolloomooloo, Darlinghurst and parts of Surry Hills. Originally the area saw affluent residents building grand houses, many with spectacular gardens, attracted by the bay and close proximity to the city and Government House. The area slowly started to change after expensive houses were built in Elizabeth Bay and further east and a road was needed from Sydney. It was for this reason that William Street was built, dividing the land for the first time.

Trams
The Woolloomooloo tram line opened in stages between 1915 and 1918. This line branched off from Park Street and ran north along Haig Avenue, St John Young Crescent and Lincoln Crescent to Brown's Wharf at Woolloomooloo. Through service ran from Circular Quay via Elizabeth and Park Streets. The line was an early closure, in 1935, being replaced by a bus service from Pyrmont.

Landmarks
Woolloomooloo is home to the Finger Wharf, known for its remarkable size. It is 400 metres (1,310 ft) long and 63 m (210 ft) wide and stands on 3,600 piles. The Sydney Harbour Trust built the Finger Wharf, or Woolloomooloo Wharf, between 1911 and 1915 with the charter to bring order to Sydney Harbour's foreshore facilities. The wharf became the largest wooden structure in the world. The areas commerce was dominated by shipping at the wharf and by the regular influx of sailors & officers from the Garden Island base of the Royal Australian Navy. The wharf's influence diminished for Woolloomooloo during the 1970s when other more modern wharves were preferred. By the 1980s the wharf lay derelict and empty and in 1987, the state government decided to demolish the Wharf. A new complex was approved to replace the wharf in Woolloomooloo Bay, but when demolition work was due to begin in January 1991, locals blocked entrance to the site. Unions imposed a Green ban which stopped demolition crews from undertaking work. In the mid-1990s the wharf was renovated into a boutique hotel featuring 104 guestrooms, loft-style suites and private residencies. It also features several restaurants and bars, including the popular Water Bar, frequented by many visiting celebrities. At first the hotel was launched as "W Sydney - Woolloomooloo" and was the W Hotels brands' first internationally launched property outside of the United States. The hotel's licensing expired in 2007 and rebranded as "Blue Hotel", managed by Taj Hotels & Resorts. Notable residents include actor, Russell Crowe, who lives in a $14 million penthouse which as a result has become famous in Australia and abroad and as well as one of the most expensive and sought after places in the country and prominent and controversial former Australian radio presenter John Laws.

The Andrew "Boy" Charlton Pool, sits on the western side of Woolloomooloo Bay, amongst the Royal Botanical Gardens.