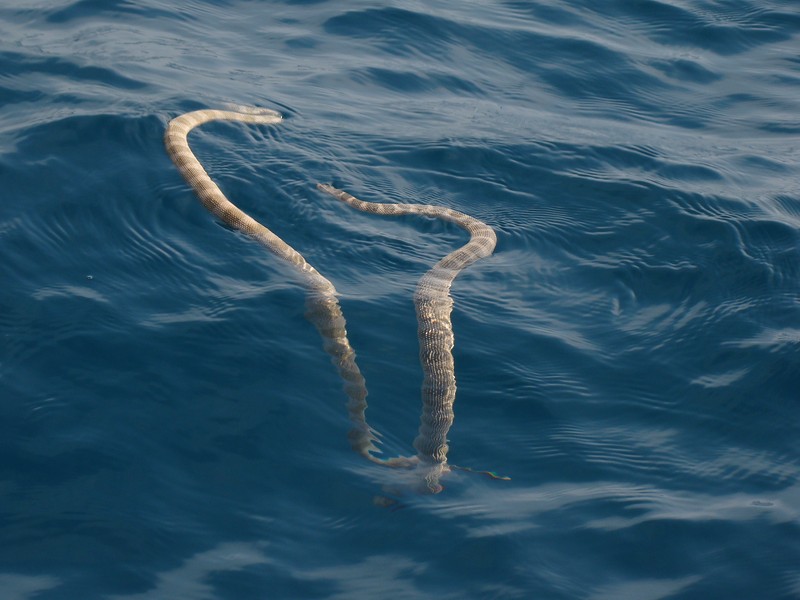 Sea snakes occur throughout the UAE sea area. There are at least seven species, all of which belong to one family, the hydrophiidae. They are excellent swimmers and the laterally flattened tail makes them eaqily recognisable and distinguishes from eels, such as the harmless yellow and black banded snake eels that often feed in seabeds in United Arab Emirates waters but are rarely seen on the suface alive.

Description
100 cm or more in length. Bulky, but with a relatively small head. Yellow, sometime pale dull green or grey, with dark bands along the length of the body. Top of the head usually dark with narrow yellow band forward of the small eyes. Undersides pale. Laterally flattened tail, diagnostic of all sea snakes. Like all sea snakes, it is dangerous and a bite can be fatal. However, it is generally docile.

Range
It has a wide distribution ranging from the Persian Gulf, Bay of Bengal to South-East Asia with a majority of the specimens obtained from the southern Indian and Sri Lankan coasts. Earlier distribution of Hydrophis lapemoides extended from Persian Gulf to the east coast of India, and in the coastal waters of Sri Lanka (Mc Carthy and Warrel 1991). However, the species has recently been recorded from the southern part of the Malacca Strait and the Gulf of Thailand (Rasmussen 1987 ; Mc Carthy and Warrel 1991).

Biology
This snake feeds on fish. It is sometimes caught as bycatch in fishing operations. It is a marine species but it can enter and dwell in freshwater bodies for extended periods of time. It is a venomous species. This is a common and widespread species, but little is known about its biology.