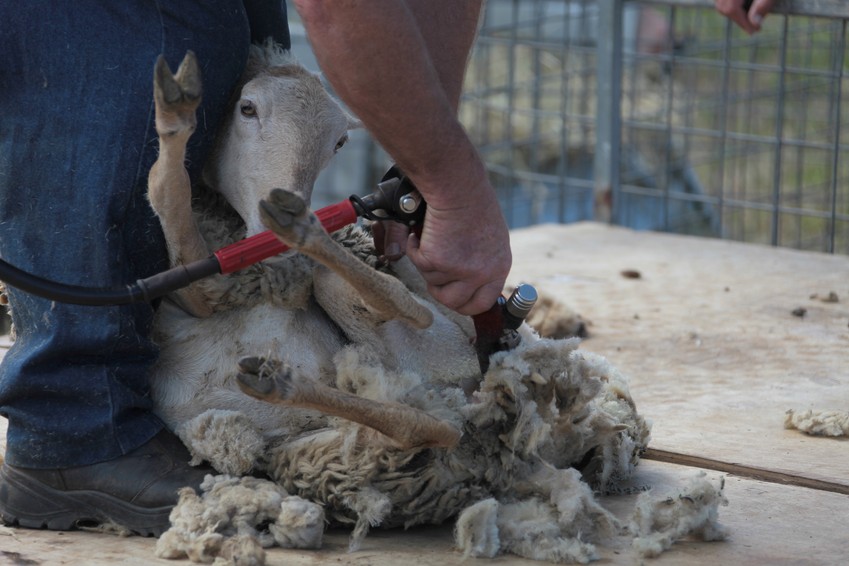 Sheep shearing, shearing or clipping is the process by which the woollen fleece of a sheep is cut off. The person who removes the sheep's wool is called a shearer. Typically each adult sheep is shorn once each year (a sheep may be said to have been "shorn" or "sheared", depending upon dialect). The annual shearing most often occurs in a shearing shed, a facility especially designed to process often hundreds and sometimes more than 3,000 sheep per day. Sheep are shorn in all seasons, depending on the climate, management requirements and the availability of a woolclasser and shearers. Ewes are normally shorn prior to lambing, but consideration is typically made as to the welfare of the lambs by not shearing during cold climate winters. Shorn sheep tolerate frosts well, but young sheep especially will suffer in cold, wet windy weather (even in cold climate summers). In this event they are shedded for several nights until the weather clears. Some sheep may also be shorn with stud combs which leave more wool on the animal, giving greater protection.

History
Sheep-shearing was an annual June event in medieval England, culminating in the sheep-shearing feast. Shearers wear moccasins to protect their feet, grip wooden floors well, and absorb sweat. In Australia, up until the 1870s, squatters washed their sheep in nearby creeks prior to shearing. Later some expensive hot water installations were constructed on some of the larger stations for the washing. Sheep washing in Australia was influenced by the Saxony sheep breeders in Germany who washed their sheep and by the Spanish practice of washing the wool after shearing. There were three main reasons for the custom in Australia:

The practice of washing the wool rather than the sheep evolved from the fact that hotter water could be used to wash the wool, than that used to wash the sheep. When the practice of selling wool in the grease occurred in the 1890s, wool washing became obsolete. Australia and New Zealand had to discard the old methods of wool harvesting and evolve more efficient systems to cope with the huge numbers of sheep involved. Shearing was revolutionized by the invention of an Australian sheepgrower. Frederick York Wolseley. His machines made in Birmingham England by his business The Wolseley Sheep Shearing Machine Company were introduced after 1888, reducing second cuts and shearing time. By 1915 most large sheep station sheds in Australia had installed machines, driven by steam or later by internal combustion engines. Shearing tables were invented in the 1950s and have not proved popular, although some are still used for crutching. Today, large flocks of sheep are shorn by professional shearing teams working eight hour days, most often in spring, by machine shearing. These contractor teams will consist of shearers, shed hands and a cook (in the more isolated areas). The shed staff working hours and wages are regulated by industry awards. A working day starts at 7:30 AM and the day is divided into four “runs” of two hours each. “Smoko” breaks of a half hour each are at 9:30 am and again at 3:00 pm. The lunch break is taken at 12:00 pm for one hour. Most shearers are paid on a piece rate, i.e., per sheep. Shearers who “tally” more than 200 sheep per day are known as “gun shearers”. Typical mass shearing of sheep today follows a well-defined workflow: remove the wool, throw the fleece onto the wool table, skirt, roll and class the fleece, place it in the appropriate wool bin, press and store the wool until it is transported. In 1984 Australia became the last country in the world to permit the use of wide combs, due to previous Australian Workers Union rules. Although they were rare in sheds, women now take a large part in the shearing industry by working as pressers, wool rollers, roustabouts, wool classers and also shearing, too.

Wool removal
A sheep is caught by the shearer from the catching pen and taken to his “stand” on the shearing board. It is then shorn using mechanical handpiece (see Shearing devices below). The wool is removed by following an efficient set of movements, devised by Godfrey Bowen in c. 1950, (the Bowen Technique) or the Tally-Hi method. In 1963 the Tally-hi shearing system was developed by the Australian Wool Corporation and promoted using synchronised shearing demonstrations. Sheep struggle less using the Tally-Hi method, reducing strain on the shearer and there is a saving of about 30 seconds shearing each sheep. The shearer begins by removing the sheep's belly wool, which is separated from the main fleece by a roustabout, while the sheep is still being shorn. A professional or "gun" shearer typically removes a fleece without badly marking or cutting the sheep in two to three minutes, depending on the size and condition of the sheep, or less than two in elite competitive shearing. The shorn sheep is moved from the board via a chute in the floor, or wall, to a counting out pen, efficiently removing it from the shed. The CSIRO in Australia has developed a non-mechanical method of shearing sheep using an injected protein that creates a natural break in the wool fibres. After fitting a retaining net to enclose the wool, sheep are injected with the protein. When the net is removed after a week, the fleece has separated and is removed by hand. In some breeds a similar process occurs naturally

Fleece skirting
Once the entire fleece has been removed from the sheep, the fleece is thrown, clean side down, on to a wool table by a shed hand (commonly known in New Zealand and Australian sheds as a roustabout or roustie). The wool table top consists of slats spaced approximately 12 cm apart. This enables short pieces of wool, the locks and other debris, to gather beneath the table separately from the fleece. The fleece is then skirted by one or more wool rollers to remove the sweat fribs and other less desirable parts of the fleece. The removed pieces largely consist of shorter, seeded, burry or dusty wool etc. which is still useful in the industry. As such they are placed in separate containers and sold along with fleece wool. Other items removed from the fleece on the table, such as faeces, skin fragments or twigs and leaves, are discarded a short distance from the wool table so as not to contaminate the wool and fleece. Following the skirting of the fleece, it is folded, rolled and examined for its quality in a process known as wool classing, which is performed by a registered and qualified wool classer. Based on its type, the fleece is placed into the relevant wool bin ready to be pressed (mechanically compressed) when there is sufficient wool to make a wool bale.

Rooing
In some primitive sheep (for example in many Shetlands), there is a natural break in the growth of the wool in spring. By late spring this causes the fleece to begin to peel away from the body, and it may then be plucked by hand without cutting – this is known as rooing. Individual sheep may reach this stage at slightly different times.

Shearing devices
Blade shears consist of two blades arranged similarly to scissors except that the hinge is at the end farthest from the point (not in the middle). The cutting edges pass each other as the shearer squeezes them together and shear the wool close to the animal's skin. Blade shears are still used today but in a more limited way. Blade shears leave some wool on a sheep and this is more suitable for cold climates where the sheep needs some protection from the elements. For those areas where no powered-machinery is available blade shears are the only option. Blades are more commonly used to shear stud rams.
Machine shears, known as handpieces, operate in a similar manner to human hair clippers in that a power-driven toothed blade, known as a cutter, is driven back and forth over the surface of a comb and the wool is cut from the animal. The original machine shears were powered by a fixed hand-crank linked to the handpiece by a shaft with only two universal joints, which afforded a very limited range of motion. Later models have more joints to allow easier positioning of the handpiece on the animal. Electric motors on each stand have generally replaced overhead gear for driving the handpieces. The jointed arm is replaced in many instances with a flexible shaft. Smaller motors allowed the production of shears in which the motor is in the handpiece; these are generally not used by professional shearers as the weight and heat of the motor becomes bothersome with long use.