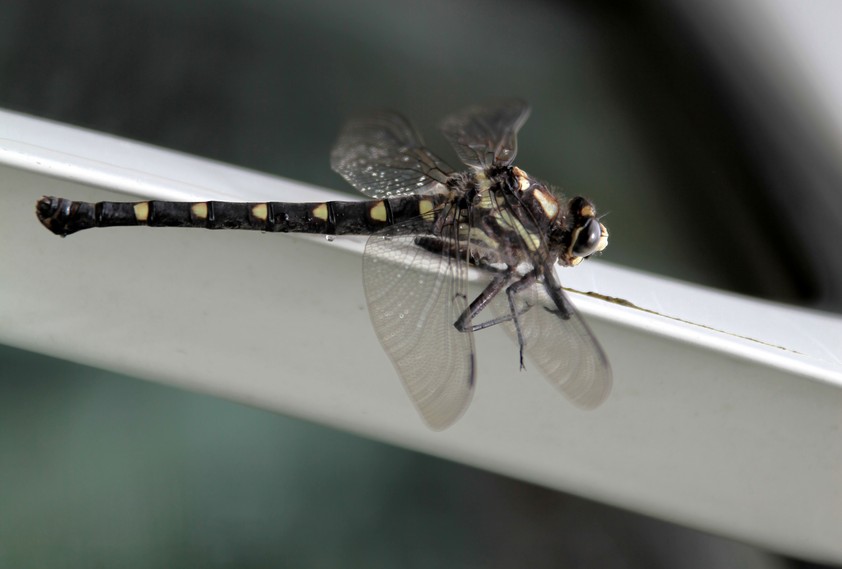 Uropetala carovei, or New Zealand bush giant dragonfly (Kapokapowai in the Maori language), is a giant dragonfly of the family Petaluridae, endemic to New Zealand. The Maori name means "water snatcher" alluding to the water dwelling larva, which, like all dragonflies, has a long extendable jaw that shoots out to snatch prey. The yellow and black body can be up to 86 mm long, with a wingspan up to 130 mm, making it the largest dragonfly in New Zealand. Males have petal-shaped hind appendages. Its diet is smaller insects, including cicadas. They are preyed on in turn by rats, kingfishers and even wasps. They are slow and noisy fliers. The nymphs tunnel into the soft earth of a stream bank or seepage, where they occupy a chamber half-filled with water for about five years. They emerge at night to seek prey near the burrow entrance. They are sensitive to disturbance so are rarely observed. The Petaltail Dragonfly is the common name of Uropetala carovei. Specifically, the term "petaltail" refers to the male's abdominal parts necessary for mating with females. These parts are not unique in their general function and overall design to this particular dragonfly. In fact, equivalents will be found on all male dragonflies.