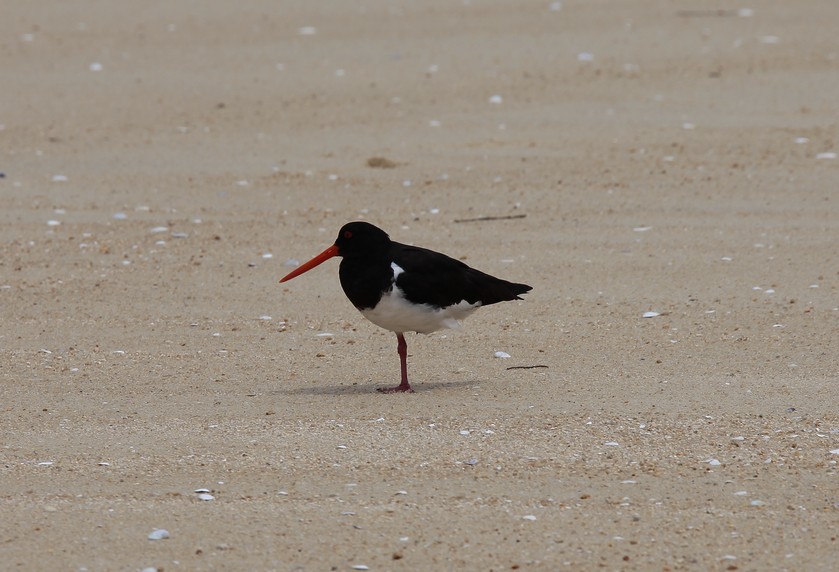 Description
Easily identifiable as a pied oystercatcher – a large wader with striking black and white plumage, long red-orange bill and red legs. Distinguish from pied morph of Variable Oystercatcher by white lower back, more white on wing and demarcation line of black and white on breast further forward. Distinguish from Pied Oystercatcher by longer bill and shorter legs as well as forward demarcation line of white on back being pointed rather than square. Measurements: length 46 cm; wingspan 80-86 cm; weight 550 g.

Distribution and habitat
The South Island Pied Oystercatcher is endemic to New Zealand where it breeds inland on the South Island, after which most of the population moves to estuaries and harbours on the North Island. It has been recorded occasionally as a vagrant on Norfolk Island, Lord Howe Island and the eastern coast of mainland Australia. Its breeding habitat comprises braided river systems, open paddocks and cultivated land, lake beaches, subalpine tundra and herbfields. Non-breeding habitat includes coastal estuaries, bays, beaches, sandflats and intertidal mudflats.
Behaviour

Conservation
The population of this species declined, mainly because of hunting, during the late 19th century and early 20th century but, with legal protection since 1940, has since been increasing. In 2002 the total population was estimated to be 110,000. Its conservation status is of Least Concern.