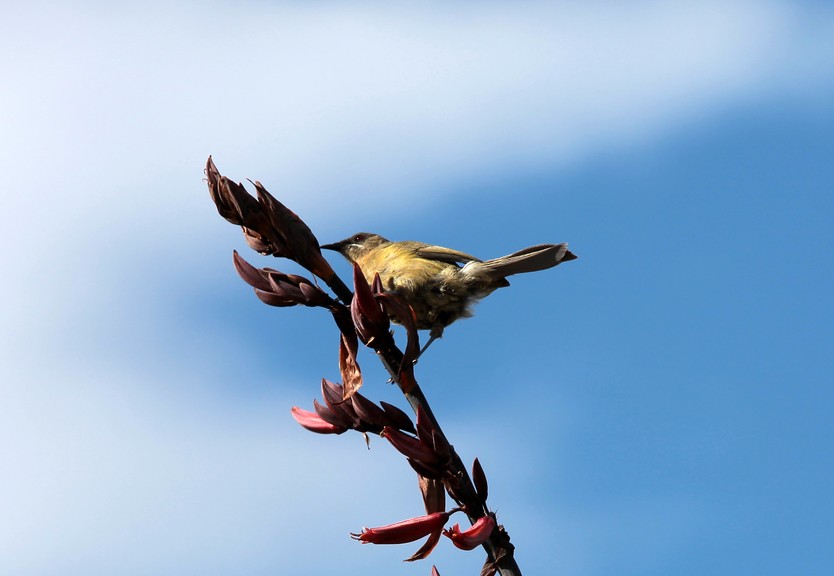 The New Zealand Bellbird (Anthornis melanura), also known by its Maori names Korimako or Makomako, is a passerine bird endemic to New Zealand. It has greenish colouration and is the only living member of the genus Anthornis. The bellbird forms a significant component of the famed New Zealand dawn chorus of bird song that was much noted by early European settlers. The explorer Captain Cook wrote of its song "it seemed to be like small bells most exquisitely tuned". Its bell-like song is sometimes confused with that of the Tui. The species is common across much of New Zealand and its offshore islands as well as the Auckland Islands.

Description
Males are olive green with a dark purplish sheen on their head and black outer wing and tail. While females are a duller olive brown with a blue sheen on the head and yellowish-white curving from the base of the bill to below the eye. Both have a notably red eye. They are about 17–20 cm from the tip of their beak to the end of their tail. Females weigh about 25 gram and males 32 gram. Juveniles females have brown eyes and a light yellow cheek stripe. Juvenile males have dull brown-black outer wing and tail feathers.

Distribution
The bellbird is found throughout both the main islands of New Zealand apart from the north of the North Island. Its population and distribution had been seriously affected by the introduction of European-style farming, which has led to the removal of native forests (the natural habitat of the bellbird). Another important factor is the introduction of predatory species such as cats, weasels, stoats, ferrets, rats and food-robbing species like wasps. Predators either eat the birds or consume eggs, while food robbers compete with the bellbird for its natural food sources of nectar, honeydew and insects. The decline occurred around the same time as many other New Zealand species, but for unknown reasons was reversed and the species is still common across much of New Zealand.

Behaviour
Breeding
Breeding occurs from September to January where two broods can be produced. Their nesting habits are similar to the Tui in respect to colour of eggs, clutch size and incubation. They generally lay three to four eggs with pinkish brown spots and blotches.

Diet
Bellbirds feed on nectar, fruit and insects. Insects are important for females and their chicks during the breeding season. As honeyeaters they play an important part pollinating numerous native plants such as mistletoe, fuchsia and kowhai.

Song
Bellbird song consists of three distinct sounds similar to the sound of chiming bells. They sing during the day but more in the early morning and late evening. Their alarm call is a repeated set of harsh staccato notes, similar to a blackbird.