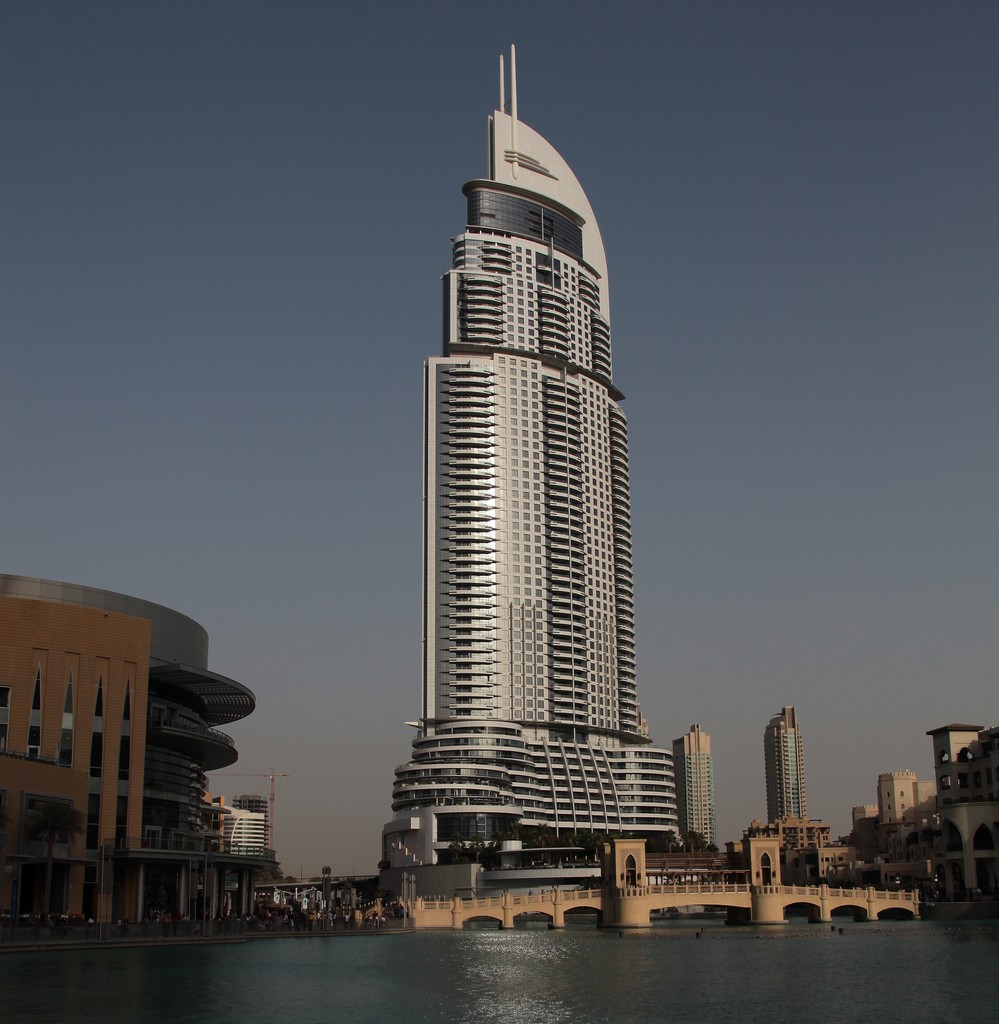 The 5 star hotel and residential compound features 196 rooms and 626 serviced apartments.
On the night of 31 December 2015, a major fire broke out on The Address tower; initially a small fire on the 20th floor of the terrace portion of the building, strong winds caused it to spread across the main tower. The tower was evacuated at around 22:45, as well as the nearby Dubai Mall.
Fire breaks out in The Address Downtown Dubai
DUBAI December 31, 2015 Naser Al Wasmi  THE NATIONAL (UAE) Friday, January 1, 2016  |  Rabea Al Awwal 21, 1437
At least 16 people were injured after a huge blaze broke out at The Address Downtown Dubai on Thursday night, hours before New Year’s Eve fireworks started at the nearby Burj Khalifa. Civil Defence responders were on the scene shortly after the fire began about 9.30pm, reportedly on the 20th floor. The Dubai Waterfront was evacuated with many visitors being moved into the Dubai Mall. Other people had been moved to Sheikh Mohammed bin Rashid Boulevard. Witnesses reported hearing explosions after the fire was well under way. Mohammed Al Sarraf, a Kuwaiti businessman who went to Dubai to celebrate the New Year with his wife, said the fire spread quickly. “It’s raging,” Mr Al Sarraf said. “It’s got so much bigger in five minutes. It’s gone from just a small fire at the foot of the building and now it’s shooting up the middle and the top. It’s getting out of hand.” He said he saw the fire from across Sheikh Zayed Road, and smelled smoke. “People are gathering and they are watching it and they are in shock.” Ahmad Al Bader, a restaurateur who was at the Burj Khalifa with friends, watched as the fire took over the building. He and his family were at The Waterfront when the area was evacuated. “I saw the flames just as it started and now it is out of hand. I can’t see anything because of the smoke,” Mr Al Bader said. “They evacuated people in The Address. My uncle and aunt were having dinner there and they were quickly rushed out.  “It started off very small. I thought it was a barbecue on a balcony or something and within four minutes it spread.” As the blaze grew, Dubai Media Office issued a tweet reassuring visitors that it was being brought under control: “A fire has been reported in The Address Downtown hotel. Authorities are on site to address the incident swiftly and safe.” Dubai’s Chief of Police Maj Gen Khamis Al Muzeina said that officers were checking the hotel to ensure it was empty. Dubai Department of Tourism and Commerce Marketing said it would provide rooms for guests evacuated from The Address. The fire could be seen from across the city, with some revellers at sea also saw the flames. “We had gone out to the shops about 9pm and the hotel building was fine, but when we came back about half an hour later we could see the flames,” said a German resident of Business Bay. “At first I thought it was part of some kind of show or display but then I realised it was a fire. It seemed to have started at the bottom near the restaurants area and started going higher up. The fire is in the central core area and has gone very high up the tower.” Police told people who drove to the area that they would not be able to drive home until at least 12.30am. Witnesses said crews continued to head to the area hours after the blaze started.