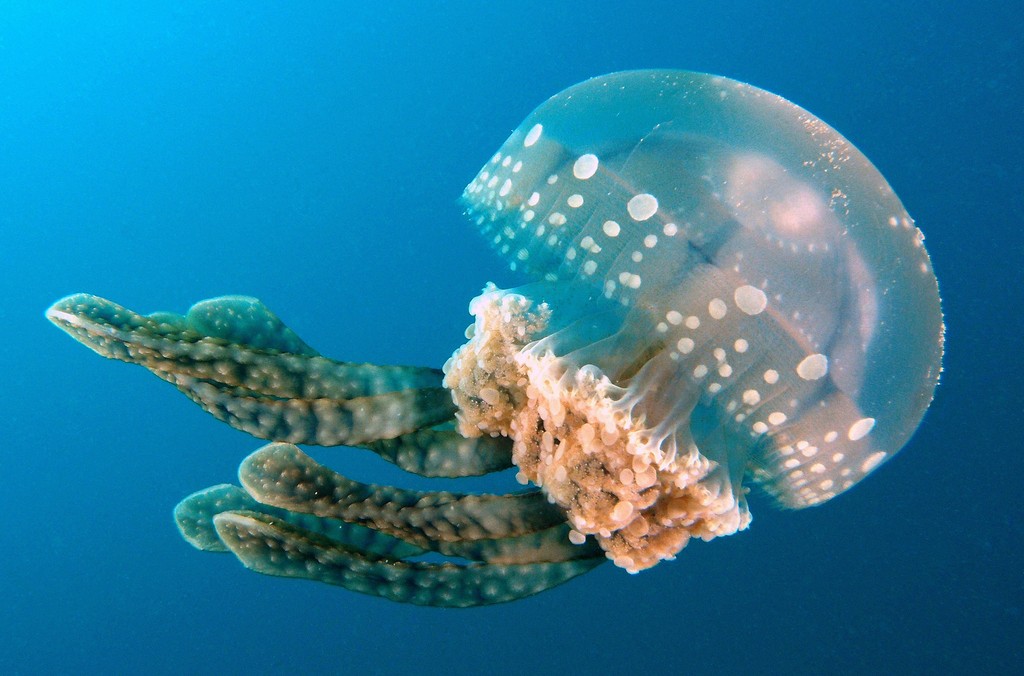 Description
Width to 8/10 cm. The lagoon jellyfish has many subspecies that grow more dissimilar as they age. There are considerable morphological differences among subspecies that live in different environments, gather in different populations, and even between the individual jellyfish themselves. Four main morphological differences are used to differentiate between these subspecies: the number and shape of the velar lappets (flaps), the length of the mouth arms relative to bell radius, the length of the terminal clubs relative to bell radius, and color. The following summarizes the features that are considered characteristic of the traditional lagoon jellyfish.
The translucent bell of Mastigias papua is usually hemispherical, with a diameter ranging from 30 to 80 mm. This species has 8 frilled oral arms, rather than tentacles, whose total length is approximately equal to the bell-radius. The mouth arms are divided into two sections: a simple upper part, which tends to be about 1.5 times as long as the 3 winged lower part of the arm. These arms end in a club-like filament that has a triangular cross section, though this is absent in some species. Each oral arm has mouths on the club, as well as along the length towards the bell.
Significant color variation exists within Mastigias papua, though the bell is usually greenish blue to olive green with yellow, white, and/or brown oval, granular spots across the rim (over the exumbrella). This coloring can be attributed to the zooxanthallae that reside symbiotically within the lagoon jellyfish (mostly in the mesoglea).
The records of Mastigias papua being raised in captivity are slim, the most specific of which states that lagoon jellyfish can live more than three months in captivity. No records were found indicating how long they live in the wild.

Distribution
Mastigias papua is widely distributed through the Indian Ocean, China Sea to Japan, and outward over the Pacific to the Fiji Islands. Reported from New Caledonia. Found as far west as the Indo-West Pacific, Mastigias papua has the greatest morphological diversity in Palau. In Palau, a radiation of forms has resulted in the recognition of many subspecies of Mastigias papua that are morphologically distinct.

Habitat
The lagoon jellyfish is found in the ocean, where it tends to dwell within the top 2.5 m of the water during the day to allow its symbiotic zooxanthellae access to light. Sunlight governs its life, especially in the Palau lakes, and this species follows the sun from west to east until it reaches the shadows near the shore. When the sun is setting, the lagoon jellyfish sinks to lower levels of its habitat. Mastigias papua requires specific temperature, salinity, and exogenous cues for proper strobilation (transverse fission). They also respond evolutionarily to their specific habitats, as demonstrated by the endemic speciation of Mastigias papua in the Palau lakes.

Development
Eggs of Mastigias papua hatch into tiny, oval-shaped, flat planula larvae that swim around until they find a suitable substrate to settle. This process takes a few hours to a few days, during which the mouthless larvae does not feed. Once on a substrate, Mastigias papua attaches by its anterior end and morphs into a sessile polyp. Polyps feed on prey that floats by until they grow large enough to reproduce. At this point, they can either create motile buds asexually, or go through monodisk strobilation, forming yellow-green ephyrae. Ephyrae mature into free swimming medusa with symbiotic zooxanthellae and sensory organs.

Reproduction
Full-fledged medusas are dioecious and can be identified by sampling a part of their reproductive tissue and observing it under a dissecting microscope. Females also have characteristic brood filaments on their oral arms and disk. Medusa males release sperm that swim to eggs either within the brood filaments of the female or inside of her. A sexual generation (medusa) alternates with an asexual generation (polyp). There are no data on mate selection.
Asexual reproduction by budding can occur year round, though strobilation can only occur with cooler water temperatures since water that is too warm causes the symbiotic zooxanthallae to fail. Loss of the zooxanthellae would eliminate seventy percent of the lagoon jellyfish's food source. Other than this, the only specific observation made on how Mastigias papua breeds in the wild is that ephyrae do not seem to emerge unless the sea water temperature is around 22 degrees C. Mastigias papua polyps can reproduce asexually year-round by budding off, while medusa formation via strobilation requires lower temperatures because high temperatures kill the zooxanthellae needed for medusae to survive.
Mastigias papua may brood the young in their brood filaments until they hatch, whereupon the young planulae larva will swim away and find a place to attach. No other parental investment has been identified.

Behavior
Mainly solitary, Mastigias papua medusae swarm towards sunlight to bathe their zooxanthallae. If not for this feature, Mastigias papua could be a solitary species save for periods of reproduction. The sessile polyps are also solitary, although they may sometimes seem to group if they settle in similar places due to limited availability of suitable substrate.

Communication and Perception
These jellyfish have a nerve net along the bell as well as marginal sensory organs that determine the contractions which propel the medusa. All Scyphozoa have receptors that detect a variety of stimuli, including light (ocelli), smell, and touch (sensory lappets) as well as a statocyst, which coordinates balance. These are found in the triangular clubs (rhopalia), which in turn also allow control of stimulation of the statocyst so that the jellyfish can adjust the direction it is swimming.

Food Habits
Mastigias papua primarily derives energy from the carbon fixed by its symbiotic zooxanthallae. This energy can be absorbed from these algae directly, since they dwell within the jellyfish's tissues. Thirty percent of the jellyfish's energy is obtained from collecting zooplankton, phytoplankton, tiny invertebrates, and microbes within the oral arms' mouths. Unlike other jellies, which need to collect food with their tentacles and bring them to a central mouth under the bell, Mastigias papua engulfs its food through its mouths on the oral arms and sends it to the body via canals along these arms.

Predation
Mastigias papua utilizes the nematocysts that decorate its oral arms to deter predators, and to help with capturing food. When a predator (or passerby human) applies pressure, these venomous cells inject toxins. Mammals as large as a human experience many adverse effects such as rashes, severe itching, nausea, and vomiting. The only creature that has been confirmed to prey on Mastigias papua is a sea anemone, Entacmaea medusivora (Fautin & Fitt, 1991).

Ecosystem Roles
Mastigias papua hosts symbiotic zooxanthallae, and large swarms of lagoon jellyfish could be detrimental to populations of zooplankton and other small prey. Small fish have lived inside the bell of Mastigias papua for protection until the fish reach maturity.