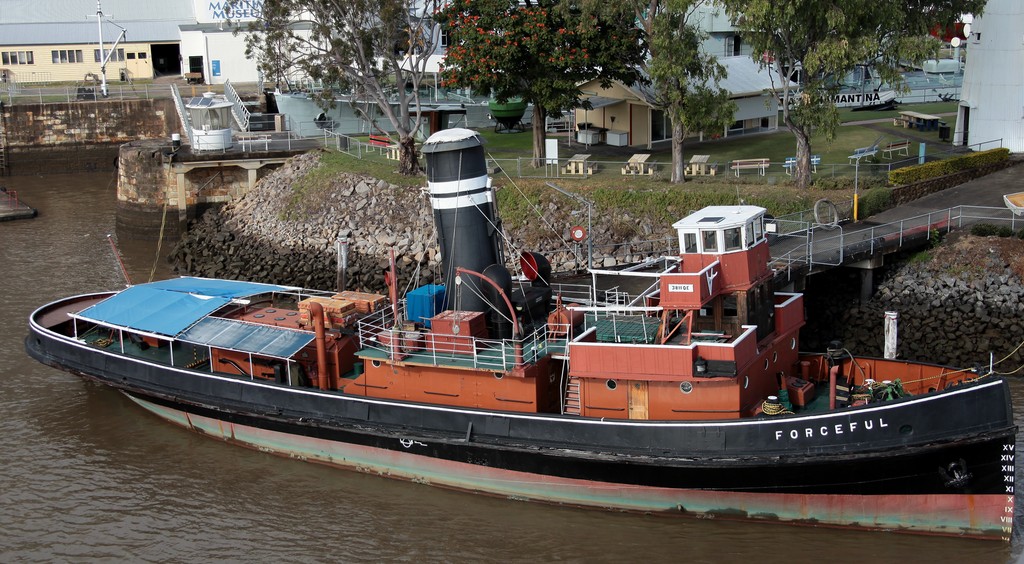 Forceful is an ocean-going tugboat built for the Queensland Tug Company. Forceful was built by Alexander Stephen and Sons Ltd in Govan, Scotland. She arrived at her homeport of Brisbane, Queensland on 7 March 1926. While she spent most of her career operating along the coast of Queensland, she was commissioned into the Royal Australian Navy during most of 1942 and 1943 as HMAS Forceful (W126).

During her war service she was based at Darwin and operated mainly in northern Australian waters. She received two battle honours for her wartime service: "Darwin 1942-43" and "Pacific 1943".

Forceful was retired from service in September 1970 and was handed over to the Queensland Maritime Museum in Brisbane on 10 June 1971. The vessel was kept operational and used for trips along the Brisbane River and to Moreton Bay until 2006, when a hull survey revealed that the tugboat was not safe to operate, and required extensive repairs.

Following a number slippings of the vessel at the Brisbane slipway in order to preserve her in a safe condition, Forceful now has several repairs on her hull in order to keep her watertight and is currently being maintained as a static exhibit at the Queensland Maritime Museum in Brisbane. But age and lack of funding was taking its toll. In June 2012 Forceful was at risk of being condemned for scrap as a small leak had developed in the vessels stern. Forceful was given a deadline to be out of the water and repaired by Maritime Safety Queensland (MSQ). With no funds available, the outlook was not good. Media attention by television and radio networks as well as maritime newsletters and social media ended up with an anonymous donation being made to facilitate the repairs Forceful needed. She came out of the water in June 2012 for repairs and returned to the Queensland Maritime Museum in July 2012.

The Queensland Maritime Museum is located on the southern bank of the Brisbane River just south of the South Bank Parklands and Queensland Cultural Centre precinct of Brisbane, and close to the Goodwill Bridge.

The museum was founded in 1971 and contains a two level exhibition building presenting historic sailing ship models together with merchant shipping from early cargo ships to modern container ships, tankers and cruise liners. It is housed in the building used for the “Pavilion of Promise” at World Expo 88, and the South Brisbane Dry Dock which was built in the 1870s and was 313 feet (95 m) long and 60 feet (18 m) wide. In 1887 the dock was extended to 430 feet (131 m) due to the increasing size of vessels.

The museum also includes a library that stocks documents, pictures and other relevant artifacts relating to maritime history. There are several maps that show how early navigators created accurate charts.

Information is also provided about some of the 1,500 plus shipwrecks that have occurred along the Queensland coast including the Great Barrier Reef.