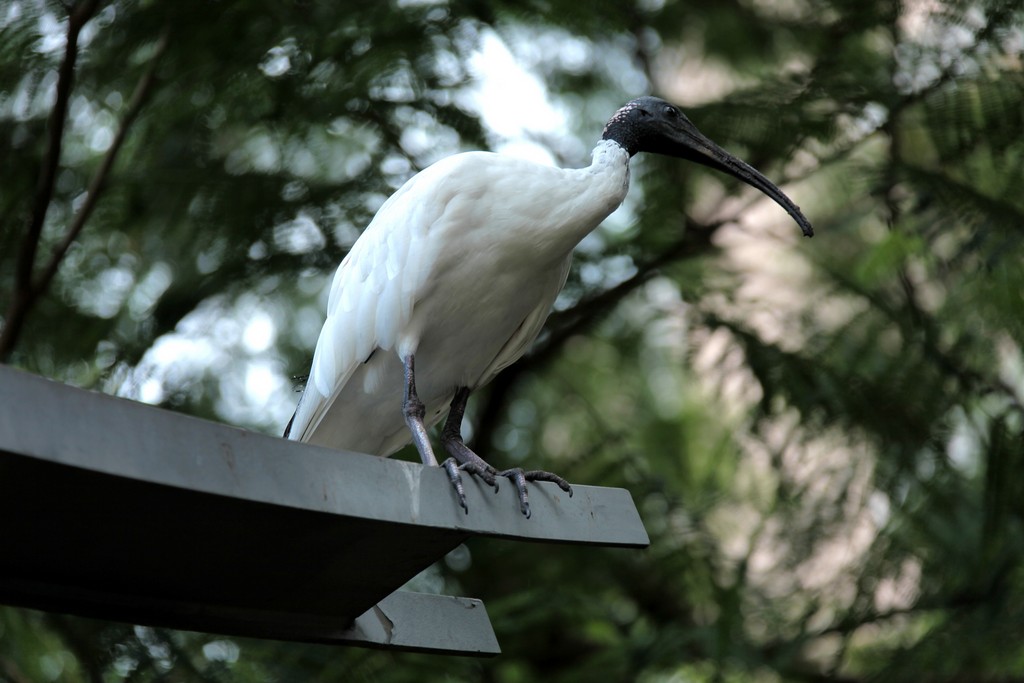 The Australian White Ibis (Threskiornis molucca), is a wading bird of the ibis family Threskiornithidae. It is widespread across much of Australia. It has a predominantly white plumage with a bare, black head, long downcurved bill and black legs. Historically rare in urban areas, the Australian White Ibis has immigrated to urban areas of the east coast in increasing numbers since the late 1970s; it is now commonly seen in Wollongong, Sydney, the Gold Coast, Brisbane and Townsville. Debate continues on whether to consider it a pest or vulnerable species. Populations have disappeared from natural breeding areas such as the Macquarie Marshes in northwestern New South Wales. Despite this, the species has been culled in parts of Sydney due to their smell and at times obtrusive nature. Its sister species is the Sacred Ibis.

Taxonomy
It was initially described by Georges Cuvier in 1829 as Ibis molucca. It is considered part of a superspecies complex with the Sacred Ibis (T. aethiopicus) of Africa, and the Black-headed Ibis (T. melanocephalus) of Asia. Its status in the complex has vacillated over the years. Many older guidebooks referred to the bird as a species T. molucca, until a comprehensive review of plumage patterns by Holyoak in 1970. Holyoak noted the three species' similarities and that the Australian taxon resembled T. aethiopicus in adult plumage and T. melanocephalus in juvenile plumage. He proposed they all be considered part of a single species T. aethiopicus. This was generally accepted by the scientific community until Lowe and Richards's assessment of plumage in 1991. They again recommended the recognition of molucca at species level. This was followed by chromosome study which highlighted each of the three species having a different karyotype. The Australian White Ibis has been considered a full species by most authorities since then. Alternate colloquial names include "Dump Chook" or "Tip Turkey", from its habit of rummaging in garbage, and "Sheep-bird". It was known as Mardungurra among the Yindjibarndi people of the central and western Pilbara.

Subspecies
Two subspecies are recognised: T. m. molucca of mainland Australia, is the nominate subspecies. T. m. pygmaeus (Solomons White Ibis) is a dwarf form found on the Solomon Islands that has been considered a separate species at times.

Description
The Australian White Ibis is around 65–75 cm (25–30 in) long and has a bald black head and neck and a long black downcurved beak, measuring over 16.7 cm (6.6 in) in the male, and under in the female. There is some sexual dimorphism in size, as the slightly heavier male weighs 1.7–2.5 kg (3.7-5.5 lb) compared to the 1.4–1.9 kg (3.1–4.2 lb) female. The body plumage is white although it may become brown-stained. Inner secondary plumes are displayed as lacy black 'tail' feathers. The upper tail becomes yellow when the bird is breeding. The legs and feet are dark and red skin is visible on the underside of the wing. Immature birds have shorter bills. The head and neck are feathered in juveniles. The White Ibis usually gives off a foul stench. This smell is not described as rotten, but an odd smell that is rather unpleasant and distinct. The call is a long croak. The Australian White Ibis reaches sexual maturity in 3 years, and can reach 28 years of age.

Distribution and habitat
The Australian White Ibis is widespread in eastern, northern and southwestern Australia. It occurs in marshy wetlands, often near open grasslands and has become common in Australian east-coast city parks and rubbish dumps in the urban areas of Wollongong, Sydney, Perth, the Gold Coast, Brisbane and Townsville. Historically it was rare in urban areas; the first influx was noted after drought drove birds eastwards in the late 1970s. The urban population further increased after a further period of drought in 1998. There has been debate in recent years over whether to consider them a pest or a possibly endangered species. Birds in tourist areas of Sydney such as Darling Harbour, the Royal Botanic Gardens, or Centennial Park have been a problem due to their strong smell. Populations in the latter two areas have been culled. The birds have also come to be regarded as a problem species in Victoria as a result of their scavenging activities, scattering rubbish from tips and bins in the process. They are even known to snatch sandwiches from picknickers. Such behaviour, together with their propensity to build nests in "inappropriate" places, and competition with captive animals, led to surplus birds being relocated from Healesville Sanctuary to Sale. However, the birds returned in a few days. The Macquarie Marshes in northwestern New South Wales was one of the main areas for breeding, but none has been reported breeding there since 2000, from 11000 pairs in 1998.

Behaviour
Feeding
This ibis feeds on various fish, frogs and other water creatures, and also insects and garbage.

Breeding
Breeding season varies with the location within Australia, generally August to November in the south, and February to May, after the Wet Season, in the north. The nest is a shallow dish-shaped platform of sticks, grasses or reeds, located in trees and generally near a body of water such as river, swamp or lake. Ibis commonly nest near other waterbirds such as egrets, herons, spoonbills or cormorants. Two to three dull white eggs are laid measuring 65 mm × 44 mm. The clutch is then incubated for 21–23 days. Hatchlings are altricial, that is, they are naked and helpless at birth, and take 48 days to fledge.