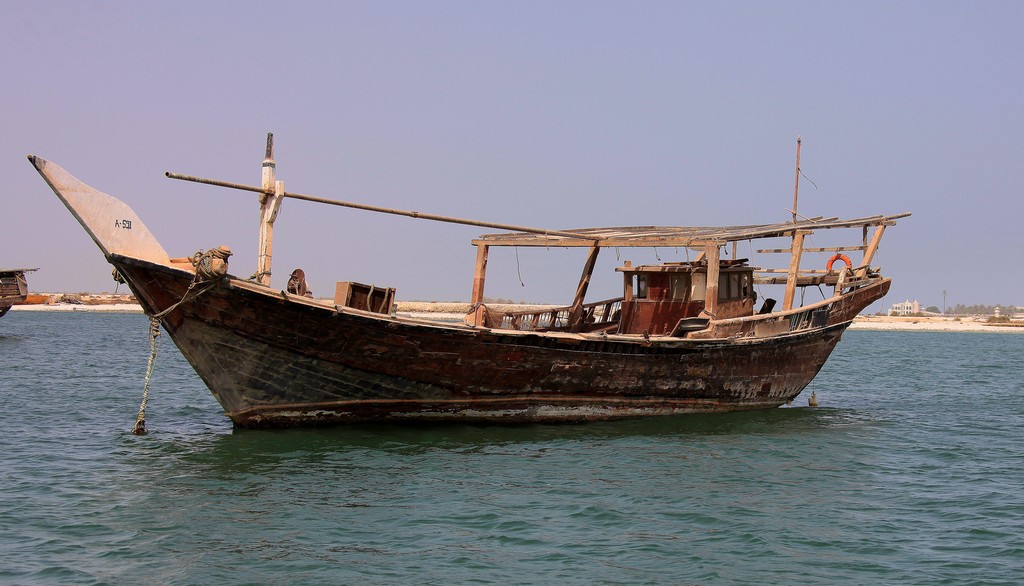 A dhow is a traditional Arab sailing vessel with one or more lateen sails. It is primarily used to carry heavy items, like fruit, along the coasts of the Arabian Peninsula, Pakistan, India and East Africa. Larger dhows have crews of approximately thirty people, while smaller dhows typically have crews of around twelve. Dhows are much larger than feluccas, another type of Arab boat usually used in fresh water in Egypt, Sudan and Iraq.

History
Even to the present day, dhows make commercial journeys between the Persian Gulf and East Africa using sails as their only means of propulsion. Their cargo is mostly dates and fish to East Africa and mangrove timber to the lands in the Persian Gulf. They often sail south with the monsoon in winter or early spring, and back again to Arabia in late spring or early summer. The term "dhow" is also applied to small, traditionally-constructed vessels used for trade in the Red Sea and the Persian Gulf area and the Indian Ocean from Madagascar to the Bay of Bengal. Such vessels typically weigh 300 to 500 tons, and have a long, thin hull design. Dhow also refers to a family of early Arab ships that used the lateen sail, the latter of which the Portuguese likely based their designs for the caravel (known to Arabs as sambuk, booms, baggalas, ghanjas and zaruqs). Yemeni Hadhrami came to Beypore, Kerala, India around the early 18th Century and started Dhow building from there due to the availability of good timber in the forests of Kerala and also the presence of skilled crafts persons in ship building. Beypore Dhows are known as 'Uru' in malayalam, the local language of Kerala. Settlers from Yemen, later known as 'Baramis', are still active in Uru business in Kerala.

Navigation
For celestial navigation, dhow sailors have traditionally used the kamal (A kamal is a celestial navigation device that determines latitude. The invention of the kamal allowed for the earliest known latitude sailing, and was thus the earliest step towards the use of quantitative methods in navigation. It originated with Arab navigators of the late 9th century, and was employed in the Indian Ocean from the 10th century. It was adopted by Indian navigators soon after, and then adopted by Chinese navigators some time before the 16th century. The kamal consists of a rectangular wooden card about 2 by 1 inches (5.1 by 2.5 cm), to which a string with several equally spaced knots is attached through a hole in the middle of the card. The kamal is used by placing one end of the string in the teeth while the other end is held away from the body roughly parallel to the ground. The card is then moved along the string, positioned so the lower edge is even with the horizon, and the upper edge is occluding a target star, typically Polaris because its angle to the horizon does not change with longitude or time. The angle can then be measured by counting the number of knots from the teeth to the card, or a particular knot can be tied into the string if travelling to a known latitude. The knots were typically tied to measure angles of one finger-width. When held at arm's length, the width of a finger measures an angle that remains fairly similar from person to person. This was widely used (and still is today) for rough angle measurements, an angle known as issabah in Arabic, or a chih in Chinese. By modern measure, this is about 1 degree, 36 minutes, and 25 seconds, or just over 1.5 degrees. Due to the limited width of the card, the kamal was only really useful for measuring Polaris in equatorial latitudes, which perhaps explains why it was not common in Europe. For these higher-latitude needs somewhat more complex devices based on the same principle were used, notably the cross-staff and backstaff. The kamal is still a tool recommended for use in sea kayaking. In such an application, it can be used for estimating distances to land. Around this time (of the Discoveries) the Arabs were using a very ingenious instrument in the Mediterranean Sea that allowed them to know latitude. It was called al-kamal – the guiding line. It was simply a small wooden board with a notch made on top and in the middle of it and a piece of string that was attached to the centre of the board; it could only be operated at night. To find where they were, an operator would adjust the distance of the piece of wood closer or farther away from his eyes in order to have the bottom of the plank levelled with the horizon and the North Star placed inside the notch. The operator would then tie a knot in the string on the point where it touched his nose, and a celestial location was then marked. There were no angles to measure and record or complicated mathematical formulas to consider. From then on the navigator knew that every time the horizon was levelled with the bottom of the board, the North Star was inside the notch, and the distance measured in the string was the same as marked, he was in a place that had the same latitude as the one where he had made those measurements. Portugal had to wait for Vasco da Gama to bring it from India on the first voyage he made there in 1498). This observation device determines latitude by finding the angle of the Pole Star above the horizon.

Types of dhow
Baghlah - the traditional deep-sea dhow
Battil - featured long stems topped by large, club-shaped stem heads
Badan - a smaller vessel requiring a shallow draught
Boum - a large-sized dhow with a stern that is tapering in shape and a more symmetrical overall structure. The Arab boom has a very high prow, which is trimmed in the Indian version.
Ghanjah - a large vessel, similar to the Baghlah, with a curved stem and a sloping, ornately carved transom.
Jalibut or Jelbut - A small to medium-sized dhow. It is the modern version of the shu'ai with a shorter prow stem piece. Most jalibuts are fitted with engines.
Sambuq or Sambuk - The largest type of Dhow seen in the Persian Gulf today. It has a characteristic keel design, with a sharp curve right below the top of the prow. It has been one of the most successful dhows in history.
Shu'ai - Medium-sized dhow. Formerly the most common dhow in the Persian Gulf used for fishing as well as for coastal trade.