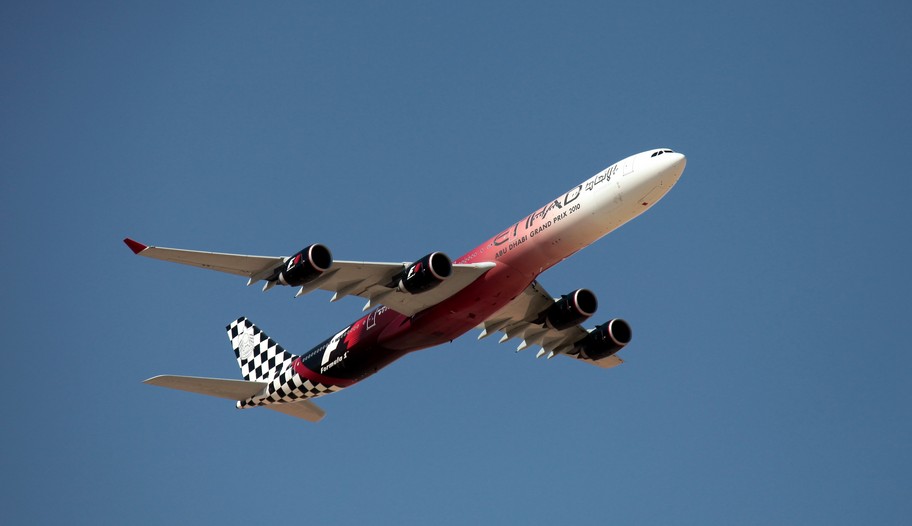 The F1 Ethiad Airbus A340-600 aircraft has a ‘dynamic' design with white at the nose leading to red at the end of the plane.
The official F1 logo is featured on the engines and motor racing's famous ‘chequered' flag is on the tail fin. With the aircraft set to operate on Etihad's services from Abu Dhabi to London, Sydney, New York and Toronto, the design will also ensure that motor racing fans from around the world can see the eye-catching design and share in the excitement of the UAE's first ever F1 Grand prix.
Peter Baumgartner, Etihad Airways' executive vice president marketing and product, said: “The inaugural 2009 Formula 1 Etihad Airways Abu Dhabi Grand Prix is only 10 months away and we are delighted to fly our own F1-themed aircraft across the world to build awareness and generate excitement to what will be a thrilling event for Abu Dhabi and the UAE.”
In addition to the Airbus A340 F1-branded aircraft Etihad also has an A320 aircraft painted in the livery of an F1 racing car. The A320 has flown since last year to every destination in Etihad's short haul network including Amman, Cairo and Beirut. The seven-figure, three year, title sponsorship deal sees the Formula 1 race in the UAE's capital city named the “Formula 1 Etihad Airways Abu Dhabi Grand Prix” until 2011. It also provides Etihad with a major trackside advertising package and podium branding for the Abu Dhabi Grand Prix.