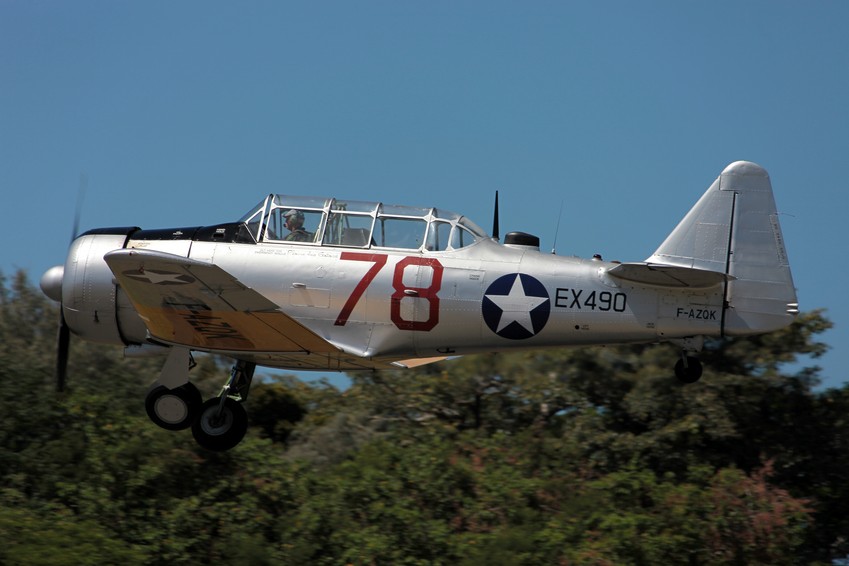 The North American Aviation T-6 Texan was a single-engine advanced trainer aircraft used to train pilots of the United States Army Air Forces, United States Navy, Royal Air Force and other air forces of the British Commonwealth during World War II and into the 1950s. Designed by North American Aviation, the T-6 is known by a variety of designations depending on the model and operating air force. The USAAC and USAAF designated it as the AT-6, the United States Navy the SNJ, and British Commonwealth air forces, the Harvard, the name it is best known by outside of the US. After 1962, US forces designated it the T-6. It remains a popular warbird aircraft used for airshow demonstrations and static displays.

Development
The Texan originated from the North American NA-16 prototype (first flown on April 1, 1935) which, modified as the NA-26, was submitted as an entry for a USAAC "Basic Combat" aircraft competition in March, 1937. The first model went in to production and 180 were supplied to the USAAC as the BC-1 and 400 to the RAF as the Harvard I. The US Navy received 16 modified aircraft, designated the SNJ-1, and a further 61 as the SNJ-2 with a different engine. The BC-1 was the production version of the NA-26 prototype, with retractable tailwheel landing gear and the provision for armament, a two-way radio, and the 550 hp (410 kW) R-1340-47 engine as standard equipment. Production versions included the BC-1 (Model NA-36) with only minor modifications (177 built), of which 30 were modified as BC-1I instrument trainers; the BC-1A (NA-55) with airframe revisions (92 built); and a single BC-1B with a modified wing center-section. Three BC-2 aircraft were built before the shift to the "advanced trainer" designation, AT-6, which was equivalent to the BC-1A. The differences between the AT-6 and the BC-1 were new outer wing panels with a swept forward trailing edge, squared-off wingtips and a triangular rudder, producing the definitive Texan appearance. After a change to the rear of the canopy, the AT-6 was designated the Harvard II for RAF/RCAF orders and 1,173 were supplied by purchase or Lend Lease, mostly operating in Canada as part of the British Commonwealth Air Training Plan. Next came the AT-6A which was based on the NA-77 design and was powered by the Pratt & Whitney R-1340-49 Wasp radial engine. The USAAF received 1,549 and the US Navy 270 (as the SNJ-3). The AT-6B was built for gunnery training and could mount a .30 in machine gun on the forward fuselage. It used the R-1340-AN-1 engine, which was to become the standard for the remaining T-6 production. Canada's Noorduyn Aviation built an R-1340-AN-1-powered version of the AT-6A, which was supplied to the USAAF as the AT-16 (1,500 aircraft) and the RAF/RCAF as the Harvard IIB (2,485 aircraft), some of which also served with the Fleet Air Arm and Royal Canadian Navy. In late 1937 Mitsubushi purchased two NA-16s as technology demonstrators and possibly a licence to build more. However, the aircraft developed by Watanabe/Kyushu as the K10W1 (Allied code name Oak) bore no more than a superficial resemblance to the North American design. It featured a full monocoque fuselage as opposed to the steel tube fuselage of the T-6 and NA-16 family of aircraft, as well as being of smaller dimensions overall and had no design details in common with the T-6. It was used in very small numbers by the Imperial Japanese Navy from 1942 onwards. After the war the Japanese Air Self Defense Force operated Texans. The NA-88 design resulted in 2,970 AT-6C Texans and 2,400 as the SNJ-4. The RAF received 726 of the AT-6C as the Harvard IIA. Modifications to the electrical system produced the AT-6D (3,713 produced) and SNJ-5 (1,357 produced). The AT-6D, redesignated the Harvard III, was supplied to the RAF (351 aircraft) and Fleet Air Arm (564 aircraft). The AT-6G (SNJ-5) involved major advancements including a full-time hydraulic system and a steerable tailwheel and persisted into the 1950s as the USAF advanced trainer. Subsequently the NA-121 design with a completely clear rearmost section on the canopy, gave rise to 25 AT-6F Texans for the USAAF and 931, as the SNJ-6 for the US Navy. The ultimate version, the Harvard 4, was produced by Canada Car and Foundry during the 1950s, and supplied to the RCAF, USAF and Bundeswehr. A total of 15,495 T-6s of all variants were built.

Operational history
Combat use
20 AT-6 Texans were employed by the 1st and 2nd fighter squadrons of the Syrian Air Force in the 1948 Arab-Israeli War, providing ground support for Syrian troops, and launching air strikes against Israeli airfields, ships, and columns, losing one aircraft to anti-aircraft fire. They also engaged in air to air combat on a number of occasions, with a tail gunner shooting down an Israeli Avia S-199 fighter. The Royal Hellenic Air Force employed three squadrons of British and American supplied T-6D and G Texans for close air support, observation, and artillery spotting duties during the Greek Civil War, providing extensive support to the Greek army during the Battle of Grammos. During the Korean War and, to a lesser extent, the Vietnam War, T-6s were pressed into service as forward air control aircraft. These aircraft were designated T-6 "Mosquitos". No. 1340 Flight RAF used the Harvard in Kenya against the Mau Mau in the 1950s, where they operated with 20 lb bombs and machine guns against the gangs. Some operations took place at altitudes around 20,000 ft above mean sea level. A Harvard was the longest-serving RAF aeroplane, with an example, taken on strength in 1945, still serving in the 1990s (as a chase plane for helicopter test flights—a role for which the Shorts Tucano's high stall speed was ill-suited). The T-6G was also used in a light attack or counter insurgency role by France during the Algerian war in special Escadrilles d'Aviation Légère d'Appui (EALA), armed with machine guns, bombs and rockets. At its peak, there were 38 EALAs active. The largest unit was the Groupe d'Aviation Légère d'Appui 72, which consisted of up to 21 EALAs. >From 1961 to 1975, Portugal, also, used hundreds of T-6G in the counter insurgency role during the Portuguese Colonial War. During this war, almost all the Portuguese Air Force bases and air fields in Angola, Mozambique and Portuguese Guinea had a detachment of T-6Gs. In 1955, Argentine Army SNJ-4's were dispatched to attack government troops on June 16 during the Revolución Libertadora and one was shot down by a loyalist Gloster Meteor. One November 18, 1963 Argentine Navy SNJs attacked a loyalist column. Argentine Navy SNJ-4s were also were used by the Colorado rebels in the 1963 Argentine Naval Mutiny, launching attacks on the 8th Regimiento de Caballería de Tanques on April 2 and 3, knocking out several M4 Sherman tanks but losing one SNJ to anti-aircraft fire. In 1957-58, the Spanish Air Force used T-6s as counterinsurgency aircraft in the Ifni War, armed with machine guns, iron bombs and rockets, achieving an excellent reputation due to its reliability, safety record and resistance to damage. The Pakistan Air Force used T-6Gs in the 1971 war as a night ground support aircraft hitting enemy soft transport vehicles. In the early hours of 5 December, during a convoy interdiction mission in the same area, Squadron Leader Israr Quresh's T-6G Harvard was hit by enemy ground fire and a shell fractured the pilot's right arm. Profusely bleeding, the pilot flew the aircraft back with his left hand and landed safely. The World War II vintage prop-engined trainers were pressed into service and performed satisfactorily in the assigned role of enemy convoys at night. Mainly as a result of the United Nations arms embargo against South Africa's Apartheid policies, T-6s remained in service with the South African Air Force as a basic trainer until 1995. They were replaced by Pilatus PC-7MkII turboprop trainers.