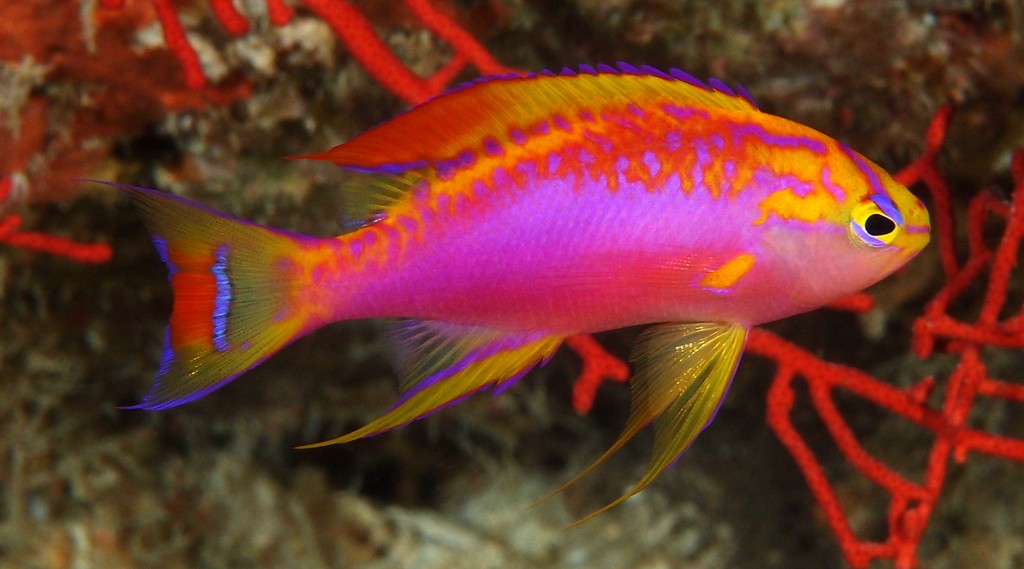 Color
This species is wide ranging across much of Oceania, but seems prone to insular variations with at least three major and rather distinct representations that can be grouped based on coloration as well as geographical range.

Male: in New Caledonia (2nd group), the males are steely purple in basal colour, with the head encapsulated in yellow. The dorsum is also yellow washed, but contains a series of super imposed purple spots that conjoin to form a reticulated pattern travelling horizontally. In addition to that, a secondary set of yellow blotches and squiggles sit just beneath the purple reticulations. There are therefore two sets of body coloration here; a series of purple reticulated spotting on the yellow base of the dorsum, and a second set of yellow squiggles on the purple body coloration just beneath. The yellow squiggles is prominent enough such that it gives an impression of a separate line coming out of the head region and starting just behind the operculum. The dorsal fin takes on the reverse coloration as the type species, with the anterior spinuous portion coloured in yellow while the soft rays in red. The red coloration in the soft rays is only limited however to the anterodorsal region, and does not creep to the posteroventral base, where it is coloured yellow. This is delineated by a diagonal line originating from the purple spotting on the dorsum, which extends to the tip of the fin. The caudal fin also differs by having a weak red blotch or bar near the edge, with purple lines along its margin which always fails to encircle it. Like the type species, the anal fins are clear, but has a strong purple line delimiting a more deeply colored region corresponding to the anal spines and first rays which form the elongate leading edge of the fin.
Female: the females share the same steely purple ground coloration, but are unmarked except for a yellow dorsal fin which creeps to a sliver of the dorsum before ending obliquely at the caudal peduncle. A red arching stripe separates the two colours near the posterior portion of the dorsum. Females lack secondary coloration such as the purple spotting that the males possess.
Etymology
Pseudanthias: from Greek, pseudes = false + from Greek, anthias = a name of an unknow fish given by Aristotle in "History of Animals". This book, written in the fourth century BC, is one of the major texts on biology by the ancient Greek philosopher Aristotle (384–322 BC), who had studied at Plato's Academy in Athens.
ventralis: from Latin, venter = belly, abdomen, ventral; of or pertaining to the belly. Named ventralis in reference to the striking prolongation of the pelvic and anal fins.
Original description: Anthias ventralis Randall, 1979 - Type locality: Patch reef on northern side off Gannet Ridge, Pitcairn Island, depth 40-44 meters.