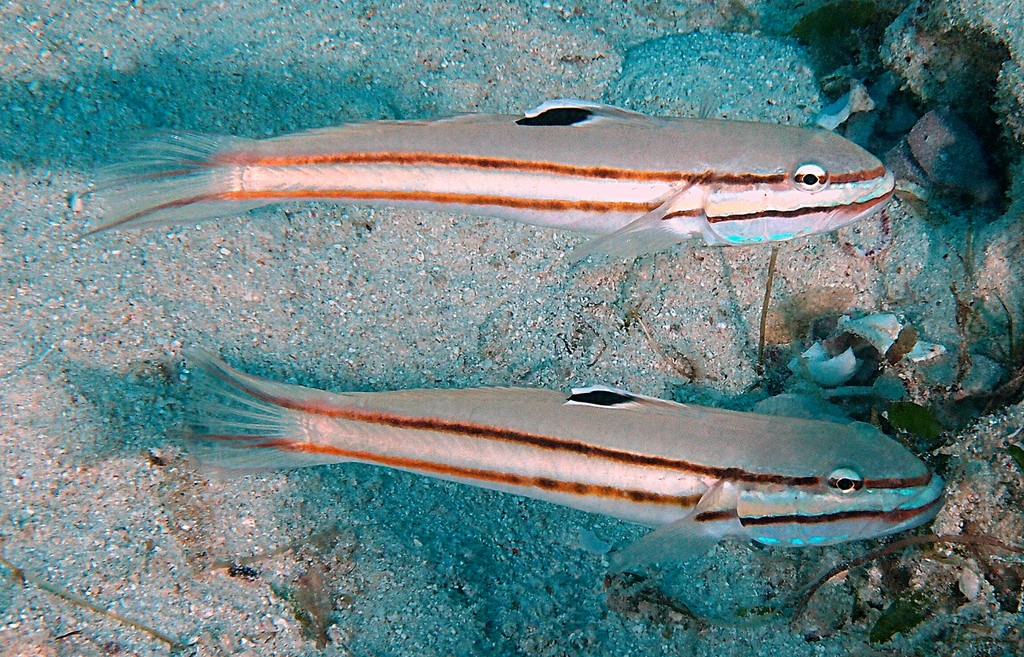 Color
The body is predominantly white to pale gray in color, with the dorsal surface a darker brownish gray. It has two prominent orange, dark red, reddish-brown, or black lines running longitudinally on the sides of its body, darkest at the anterior end and growing lighter towards the back. The upper line begins from the front of the snout, goes through the eye, and ends at the tip of the upper fork of the caudal fin. The lower line is parallel to the upper line and begins from the side of the upper lip, through the middle of the base of pectoral fins, and ends at the tip of the lower fork of the caudal fin. Both upper and lower lines are outlined in white at the caudal fin. A large oval black spot is also present between the third and fifth spines of the dorsal fin.

Etymology
Valenciennea: in honnor of Achille Valenciennes (1794-1865) who was a French zoologist. He worked with Auguste Henri André Duméril (1812-1870), Georges Cuvier (1769-1832) and Bernard Germain de Lacépède (1756-1825) since 1815. He worked on the 22-volume of a "Histoire naturelle des poissons" (1828–1848), carrying on alone after Georges Cuvier died in 1832.
helsdingenii: in honnor of W.F.C. van Helsdingen, civil servant added to the Gouvernor of the Moluccan Islands. Goram-Archipel. Pieter Bleeker, in Ichthyologiae - Archipelagi Indici - Promodus, 1858 vol.1 - P. 17 writed : "The larger part of the honour of the numerous discoveries, mentioned in this work, therefore is due to those disinterested co-operators and therefore it is for me a dire obligation, to mention here with gratitude the names of all, who by their consignments have enabled me to advance science with a not unimportant step. Those names already form a long list and at present I see among them many who have succumbed to the blows of the tropical climate."
Original description: Eleotriodes helsdingeni Bleeker, 1858 - Type locality: Pulau-Pulau Gorong, Molucca Islands, Indonesia.