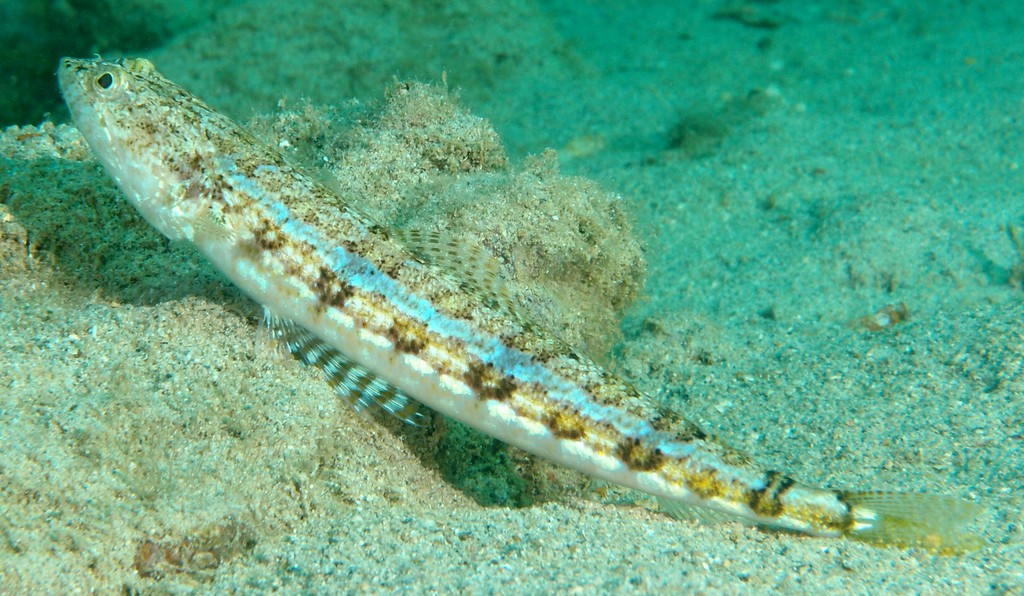 Color
A brownish lizardfish becoming pale below, with 6 darker saddles along the back, a series of dark blotches often with pale centres along the midside, a pale bluish stripe above the lateral line and a group of 6 dark spots on the tip of the snout.

Etymology
Synodus: from Greek prefix, syn- = identical, with, together, concomitant + from Greek, odous = teeth. For the single row of widely spaced teeth on upper jaw, more or less visible when the mouth is closed.
dermatogenys: from Latin, derma- = skin + from Latin, genae = cheek. In reference to the lower cheek being naked.
Original description: Synodus dermatogenys Fowler, 1912 - Type locality: Hawaiian Island.

Biology
Common on sand or sand-rubble areas of lagoon and seaward reefs to over 20 m dept. Benthic. Frequently buries in sand leaving only eyes and nostrils exposed. Generally solitary. Sometimes in pairs or small groups. Carnivore - feeds on small fishes and shrimps. Up to four males have been observed courting a single larger female. A courting male may station itself atop a female, and puff out its gill cover and spread its fins in a display of aggression towards other males.

Similar species
Synodus similis (McCulloch, 1921) - Reported from New Caledonia - Differs from Synodus similis in lacking a black spots or a black blotch on the upper rear part of the gill cover.
Synodus variegatus (Lacepède, 1803) - Reported from New Caledonia - Link to the species (here) - Synodus variegatus has the cheek fully scaled behind the mouth to the edge of the preopercle, and has a short triangular flap on the anterior nostril.