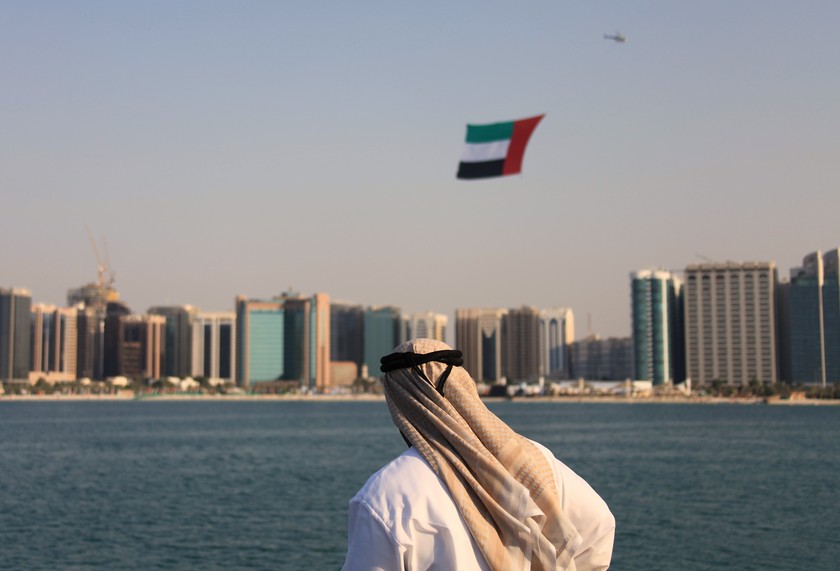 PROUD TO BE EMIRATI

Lien vers des photographies sur l'hélicoptère qui remorque la banderole (ici).
----------------------------------------------
The Emirate of Abu Dhabi Arabic: إمارة أبوظبي‎‎ Imārat Abū Ẓaby, is one of seven emirates that constitute the United Arab Emirates (UAE). It is the largest emirate by area (67,340 km2), accounting for approximately 87 percent of the total land area of the federation. Abu Dhabi also has the largest population of the seven emirates. In June 2011, it was estimated to be 2,120,700 people, of which, 439,100 people (less than 21%) were Emirati citizens, which has risen to 2.3 million in 2012. Abu Dhabi is the capital city of the emirate, after which it is named, as well as the capital of the federation. Abu Dhabi’s Gross Domestic Product (GDP) estimates, in 2011, amounted to AED 806,031 million at current prices. Mining and quarrying (includes crude oil and natural gas) accounts for the largest contribution to GDP (58.5 per cent in 2011). Construction related industries are the next largest contributor (10.1 per cent in 2011). GDP grew to AED 911.6 billion in 2012, or over 100,000 USD per capita. In recent times, the Emirate of Abu Dhabi has continuously contributed around 60 per cent of the GDP of the United Arab Emirates, while its population constitutes only 34 per cent of the total UAE population according to the 2005 census. In the early 1970s, two important developments helped the emirate achieve leaps on the path of development. The first was the establishment of the United Arab Emirates in December 1971 with Abu Dhabi as its political and administrative capital. The second was the sharp increase in oil prices following the October 1973 War, which accompanied a change in the relationship between the oil countries and foreign oil companies, leading to a dramatic rise in oil revenues.