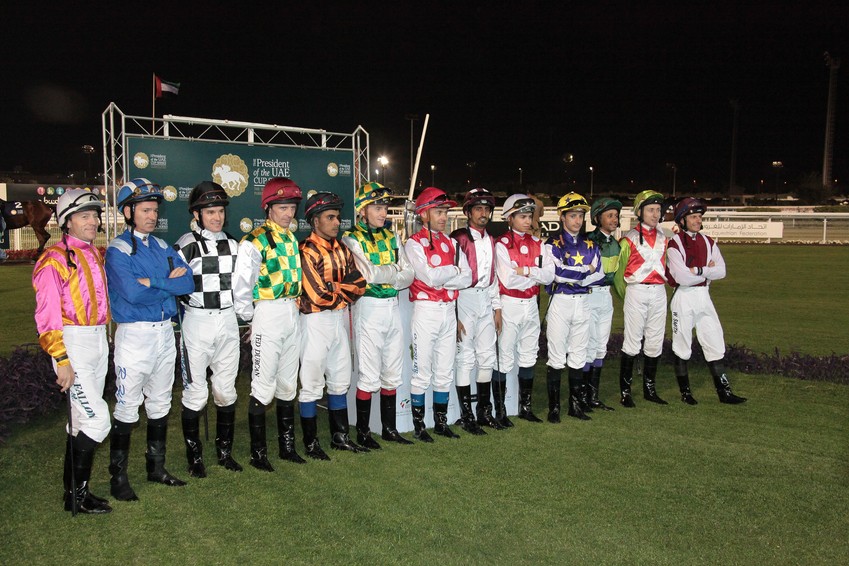 JOCKEYS READY FOR THE PICTURE

Located in the Al Mushrif area, just 10 minutes from the city center, the Abu Dhabi Equestrian Club is a tranquil oasis in one of the Gulf’s  most up-to-date and beautiful cities. The Club covers a vast area and provides members with a relaxed and restful atmosphere away from the hustle of modern day life. As the name implies, the Club was originally established as an equestrian center, but over the years, due to the encouragement and support of the late President His Highness Sheikh Zayed Bin Sultan Al Nahyan, the Club has enjoyed steady and sustained development. What was once an undeveloped sandy area is now arguably one of the finest recreational parks in the entire Gulf region. The complex consists of an international standard racecourse with racing conditions that are comparable to anywhere in the world. A number of  important races take place annually, including the National Day Cup, H.H. The President’s Cup and The Emirates Championship. These prestigious races have  been established for over 10 years and are recognized internationally. The facility also includes a circular, 2,000-meter training track on the inside of the racecourse and more than 250 air-conditioned stalls used exclusively for stabling the racehorses.

The Club also boasts a spectacular show-jumping arena, in which an obstacle similar to the famous Hickstead Bank has been constructed, along with a natural water jump that adds to the variety of the various show-jumping events that take place throughout the season. Many  important show jumping competitions take place at the Club, and the annual Abu Dhabi International Show has become well established, with riders from around the world coming back year after year to support what has been described by many as the most enjoyable event of the show-jumping season.

In line with the wishes of Their Highnesses The Sheikhs to encourage and promote equestrianism among the youth of the country and to restore the ancient craft of horsemanship to the people, the Abu Dhabi Equestrian Club has one of the most efficient and successful riding schools in the area, with instruction of all levels vailable to pupils of all ages who are wishing to learn and absorb the principles and practices required to master the art of horsemanship.

Racing
Since 1991 horse racing has taken place at the Club. Run under international rules with slight adjustments to facilitate local requirements, the racing season extends from the end of October up to the middle of April. There are usually between 15 and 18 meetings per season with 6 or 7 individual races taking place each evening. The Club stages several races of international importance each season and races such as H.H. The Presidents Cup (which carried a purse of AED. 1,000,000 for the first time in the 2003/2004 season, making it the most valuable race for Purebred Arabian horses anywhere in the world), The  National Day Cup, The Emirates Championship, H.H. Sheikh Khalifa Bin Zayed Al Nahyan & Triple Crown and H.E. Sheikh Falah Bin Zayed Al Nahyan Breeders Cup for horses bred in the UAE are all very important races as is the Al Asayl Championship race for 3 year olds only. The club hosted the UAE Derby for Arabian Horses in season 2004/2005 and there is little doubt that before long this race will become equally as important as any of the other well established races. Always eager to introduce racing enthusiasts in the Emirates to new and exciting equestrian sports, for the first time in the UAE, a harness racing event took place at the racetrack during the 2001-2002 season with great success.