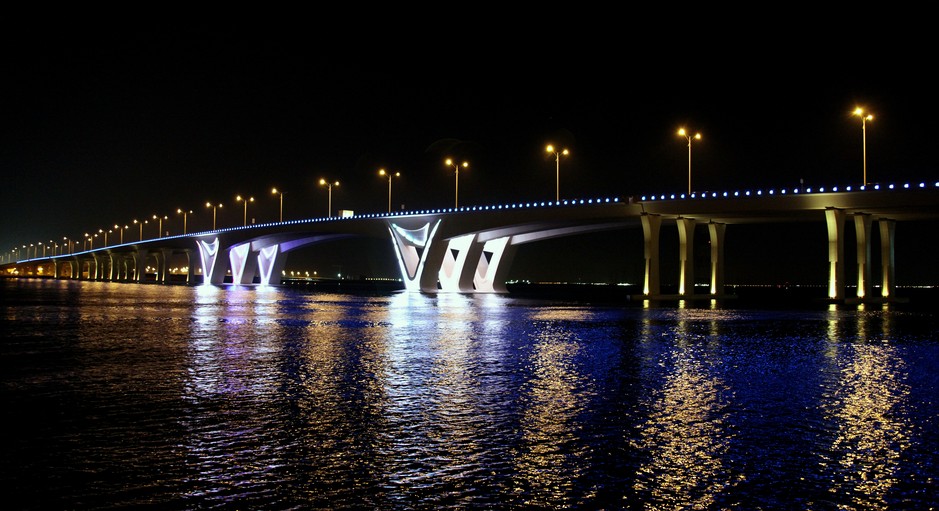 The Sheikh Khalifa Bridge and Shahama-Saadiyat Highway launched as the new Gateway to UAE's Capital. The 10 lane expressway now links Port Zayed with the Shahama District through Saadiyat & Yas Islands. In line with the urban development objectives specified by the landmark Plan Abu Dhabi 2030, TDIC marked a major milestone in its infrastructure progress this morning as the newly built 10-lane Sheikh Khalifa Bridge on Saadiyat Island was launched, and a 27-kilometreexpressway was opened in an official inauguration ceremony held under the auspices of His Highness General Sheikh Mohammed bin Zayed Al Nahyan, Crown Prince of Abu Dhabi and Deputy Supreme Commander of the UAE Armed Forces.

Abu Dhabi (literally Father of deer is the capital of and the second largest city in the United Arab Emirates). Abu Dhabi lies on a T-shaped island jutting into the Persian Gulf from the central western coast. The city proper, making up an area of 67,340 km2 (26,000 sq mi), had an estimated population of 860,000 in 2008. Abu Dhabi houses important offices of the federal government, and is the seat for the United Arab Emirates Government and the home for the Emirati Royal Family.Abu Dhabi has grown to be a cosmopolitan metropolis. Its rapid development and urbanisation, coupled with the relatively high average income of its population, has transformed Abu Dhabi to a larger and advanced metropolis. Today the city is the country's center of political, industrial activities, and a major cultural, and commercial centre due to its position as the capital. Abu Dhabi alone generated 56.7% of the GDP of the United Arab Emirates in 2008.