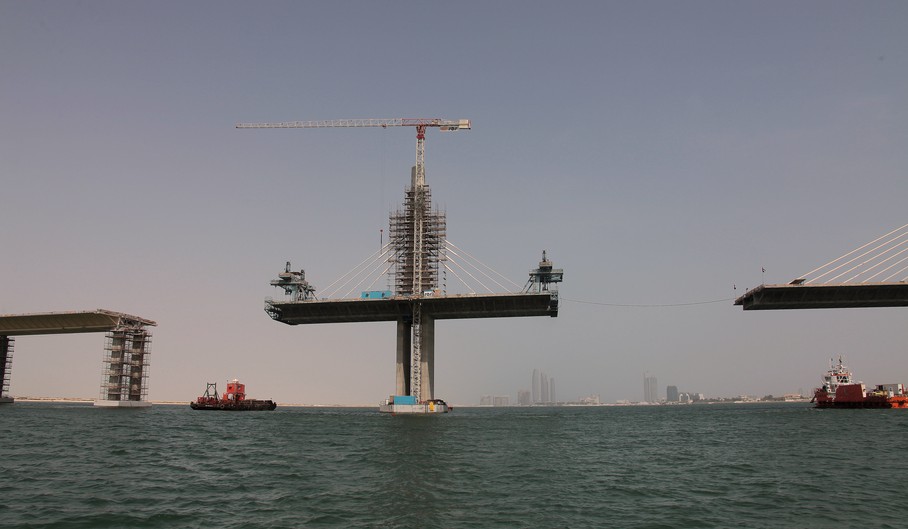 Hideriyyat Island - Hudayriat Island - Hodariyat Island- HUDAIYRIYAT ISLAND - is partly made up of dredged material but at present. Plan Abu Dhabi 2030 has marked the island for future development. The southern part of Hodariyat Island is designated as an area for Emirati housing to be constructed as quickly as necessary to fulfill the ongoing demand through formation of new households for the growing Emirati population.

The bridge will be the first stay cable bridge to be constructed in the United Arab Emirates and will link Abu Dhabi to Hodariyat Island, which is currently separated by a water channel around 1000m-wide.The bridge will be 1.3km-long, having a central span 200m wide, with the stay pylons extending some 40m above the deck level.

Abu Dhabi is planning to develop another island off the coast, in its bid to make the capital a city of islands connected by dozens of bridges and tunnels. Initial studies have begun into the development plans for Hudayriat Island, a spit of land just off the south-west coast of Abu Dhabi Island. The southern part of the island has been designated for housing for Emiratis, according to the Abu Dhabi Plan 2030. The land will be "significantly expanded to the south and cut through by canals, with a transition to mangroves along its outer edges", the master plan says. An image of the island in the plan shows several smaller islands, divided by waterways. Aurecon, an infrastructure consultancy group, is conducting a study into transport possibilities for the southern part of the island. Ken Gillard, the head of Aurecon in the UAE, said no recommendations had yet been made but one option would be a combination of a bridge and a tunnel to connect South Hudayriat to the main island.On the Abu Dhabi Island end, the connection would be near Arzanah, an active lifestyle community being developed by Capitala around Sheikh Zayed Stadium. The northern part of Hudayriat Island will be developed by the Department of Presidential Affairs, which has not given details of its plans. The Tourism Development and Investment Company (TDIC) is overseeing the construction of a US$50 million (Dh183.6m) bridge to the island on behalf on the department. Bids from construction companies end on Sunday, according to a copy of TDIC's request for bids. The development of Hudayriat Island is the latest in Abu Dhabi's expansion of the city on to neighbouring islands. Extensive construction is already under way on Sowwah Island, which is the core of the new central business district, and Reem Island, an enormous community with offices, high-rise towers and shopping. TDIC is developing a vast cultural district and leisure facilities on Saadiyat Island that will include the Louvre Abu Dhabi, a Guggenheim museum and the New York University Abu Dhabi campus. Aldar Properties is building a Formula One race track and Ferrari theme park on Yas Island, which is near the airport. All of these islands are being connected to the main island by bridges and tunnels. Falah al Ahbabi, the general manager of the Urban Planning Council, said in October there were plans for 32 new bridges in Abu Dhabi.

The Tourism Development and Investment Company (TDIC) have given the construction of a US$1.36 million (Dh500m) 1.221km long bridge to connect the Abu Dhabi Island with the Hodariyat Island to "VSL Middle East located in Dubai" and AST who will in a Joint Venture be the Main contractor on this project. "The bridge" built in tow construction methods. The approach spans of 440m and 385m built by incremental launching from the abutments with span length of up to 55m and a cable stay build main bridge of 396m with a main span length of 200 m built in cantilever mehthod with precast Segments of 3m length, 36m wide and weight up to 194ton. The stay pylons extending 46m above the deck level. The Main Bridge will give 29m vertical clearance for the 170m wide navigation channel to give enogh room for high shipps or Yachts. ‘The Twin-Piers 'on witch the aproch sit's and the incremental lauch take place, are build also from precast segments and "stressed" down to the pile-cap wich sit's on piles driven and placed by AST.‘segmental-span' this is also a very new method of pier constuction. Only the Main Bridge Piers and the Pylon will be cast in suitu. The "Pile cap". sits in shells also prefabicated. This shelles function as a formwork the pilecap and lifted and placed with a barge crane on the piles. Temporary Sliding-Berings will set on top of the pier-head witch will suport the aproch span during the forward launch and will be later replaced by permanent bridge bearings. The incremental launch will be pulled by special VSL heavy "lifting strand jacks" and have to pull at the end when the aproch reach the last pier nearly 3000tons on a 4% slope. The Main Stay Cable bridge is will be build with precast Segments in the ‘Match Cast' method. For this we assembled 2 sort-line Moulds where we will pour 133 No. of those 36m x 3m x 2,9m box segments. The 14m wide wing is suported by a strut. Those struts are also precasted. Every 2th Segment is a Stay-Segment and have anchor for the Stay Cables. On this Project we will use the VSL developet ‘VSL SSI 2000 ' saddle system ‘twin', "launcher". All activity related to the ‘Bridge Erection' is carried out above the water. All assembling, delivery of the segments and material has to be organized using barges, barge-crane and not forgetting the tide. Also the weather plays a big role here because in the UAE it is very hot some times.